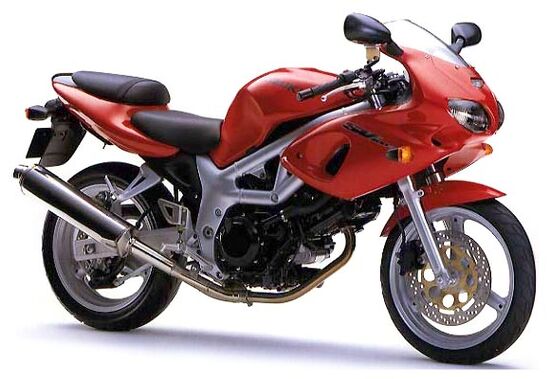 Suzuki SV400 appeared at the end of 1998 and was focused on the domestic Japanese market. The Suzuki SV650 model was exported to the countries of Europe, North America and Oceania. Both models are almost identical in appearance, but have a number of key differences. Firstly, in the volume of engines (399 cm³ versus 645 cm³).

Secondly, in the braking system (the first models of the SV400 had only one brake disc in front; the rear brake of the SV400 was a 2-piston). Thirdly, by generations (since 2003 SV650 received a powerful restyling and outwardly began to differ from the SV400). Like the older versions, the Suzuki SV400 model series largely copied the European concept of road bikes, and in particular, the concept of the Ducati brand. The experience of TL1000 at one time showed the prospects of this direction and demonstrated a noticeable market interest in this class of equipment. In turn, the SV series differed from the Ducati Monster in simpler equipment, which was expressed not only in the engine, but also in the chassis (simple suspensions, inexpensive 2-piston brakes).

The Suzuki SV 400 was based on a 2-cylinder V-shaped (90 °) liquid-cooled engine, 399 cc, producing standard (for 400 cc models of the Japanese market) 53 hp. power and 41 Nm of torque. Unlike models with in-line 4-cylinder engines of the same size, the SV400 had significantly better traction in the low and mid-range zone, which increased ride comfort. In addition, the motor itself was narrow and almost completely fit into the dimensions of the frame. Due to the arrangement of the cylinders with a pronounced forward inclination, such an engine is often called L-shaped.

Other features of the Suzuki SV 400 include an aluminum tubular frame, simple suspension in the form of a classic telescopic fork and monoshock, disc brakes, a 6-speed gearbox, a 16-liter fuel tank and 164 kg of dry weight.

The lineup of the Suzuki SV series:

The main competitors of Suzuki SV400 in the class: