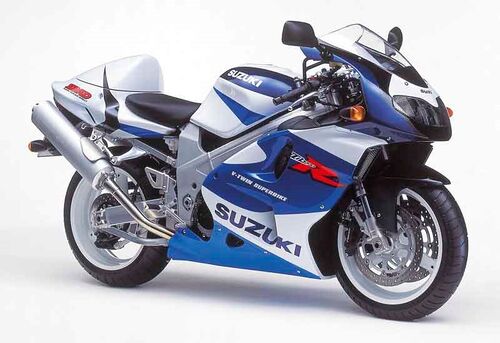 Suzuki TL1000 appeared in 1997 with the introduction of the Suzuki TL1000S model to the market. A year later, in 1998, the Suzuki TL1000R model was added to the lineup, which was distinguished by more sporty characteristics and was intended for use on the racetrack. The TL1000 series was focused mainly on the export market - Europe, North America, Australia. In Japan, this model is practically not represented.

The TL1000 series was driven by Suzuki's desire to enter the 2-cylinder sports bike class and, most importantly, compete with the Ducati models that dominated the market. The first versions of the 1997 Suzuki TL1000S had a number of technical problems that almost completely buried the model's reputation. And although in 1998 most of the problems were solved, the demand for the model was low. Only towards the end of production, true admirers of the concept appreciated this model, making it truly iconic in some countries. Also, the TL1000 experience has been successfully used in subsequent models of the DL and SV series from Suzuki, as well as by Cagiva and Bimota.

The Suzuki TL1000 was based on a 2-cylinder V-shaped (90 °) liquid-cooled engine, 996 cc, producing 125 hp. power on the TL1000S model and 135 hp. on TL1000R version. Due to the characteristic forward tilt of the cylinders, this arrangement is often called L-shaped. This engine was subsequently also installed on models Suzuki SV1000 and Suzuki DL1000 V-Strom.

Among the features of the TL1000, one should also highlight the timing system (combines the use of chains and gears), an aluminum frame, fully adjustable sports suspensions, a 6-speed gearbox, powerful 4-piston (on TL1000R - 6-piston) front brakes, a 17-liter fuel tank and from 187 kg dry weight.

The rear suspension system of the motorcycle is also noteworthy - along with the classic swingarm, a rotary-piston shock absorber is used, which is fixed almost horizontally on the right side of the motorcycle and provides damping by means of special rotating rods. This system does not lengthen the wheelbase of the motorcycle, as opposed to using the classic central monoshock. This design is reminiscent of the suspensions of Formula 1 racing cars.

2001 was the last year of Suzuki TL1000S release, and in 2002 the Suzuki TL1000R version finally left the market. Meanwhile, these models still have many clubs and a large army of admirers in many European countries.

The main competitors of Suzuki TL1000 in the class:

Most of the problems listed above were fixed already on the 1998 models, which received a new engine control unit (the mixture became correct, the forced enrichment was no longer needed), a steering damper in the drain, a reinforced clutch and a gas tank with additional supports in the frame.