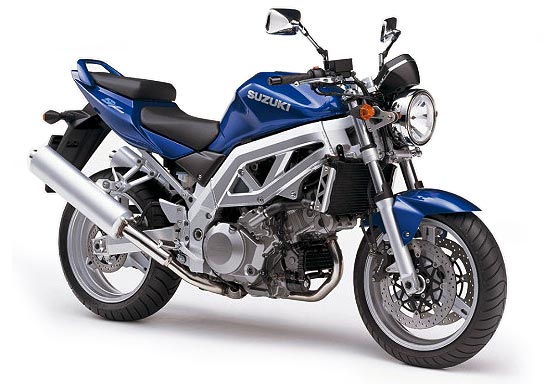 Suzuki SV1000 appeared in 2003 and was focused mainly on the export market - Europe, North America, Australia. Unlike the younger version ( Suzuki SV650), the SV1000 was also officially sold in Japan - Japanese modifications have a limited engine power of 94 hp.

Model Suzuki SV1000 is an older version of the model SV650 and has almost identical appearance with it. The main differences are in the engine, intake system and chassis (frame, swingarm, suspension, braking system). If we give a short description of the SV1000, then we can say that it is the same SV650 second generation, but in more expensive equipment. However, despite this, the "younger" was in much higher demand.

The SV1000 was based on a 2-cylinder V-twin liquid-cooled engine with a volume of 996 cc, producing up to 125 hp. power and up to 102 Nm of torque. The engine migrated from the sports version Suzuki TL1000 and was re-tuned for smoother traction at low and medium revs. This type of motor is often called L-shaped because of the characteristic blockage forward.

This engine was also installed on a tourist enduro - Suzuki DL1000 V-Strom.

2007 was the last year of production for the SV1000 series, after which it disappeared from dealerships and was removed from Suzuki's international website. Despite the interesting concept and impressive technical characteristics, the model did not receive further development.

The lineup of the Suzuki SV series:

The main competitors of Suzuki SV1000 in the class: