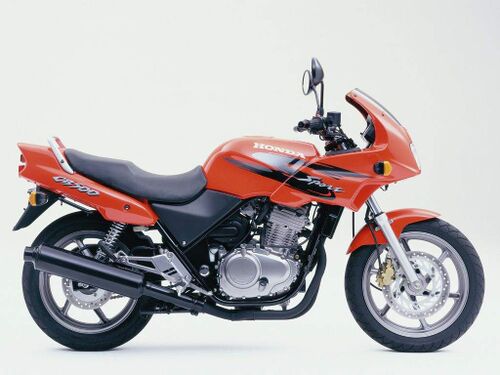 The model of the classic road motorcycle Honda CB 500 dates back to 1994 and was produced until 2002 inclusive. The model was oriented only for export and was sold mainly in the market of European countries. Due to its reliability, simplicity and low cost, the motorcycle was widely used in courier services. Despite the small volume, the Honda CB 500 had sufficient dynamic characteristics, and the engine resource, according to Honda engineers, was 300,000 km.

The main modifications of the Honda CB 500:

2002 was the last year of production for the Honda CB 500, after which it was discontinued. The main reason for this was the update of the environmental emission standards to Euro-2, which the motorcycle no longer met. As a successor, an updated model Honda CBF500 was introduced, which received more modern features and equipment, but in fact had the same engine.

The main competitors of the Honda CB 500 in the class:

Reincarnation of the CB 500 Series

Since 2013, under this name, a series of motorcycles has been produced, manufactured in Thailand and focused on the Asian market:

All three motorcycle models are based on the same platform and engine, and have nothing to do with the European model Honda CB 500 (1994-2002) described in this article.

The average fuel consumption for the Honda CB 500, according to the owners, is 5-6 liters per 100 kilometers. The exact value depends on the riding style.