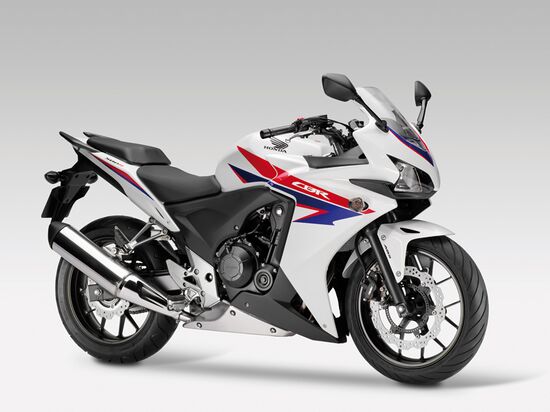 The budget sports motorcycle model Honda CBR500R appeared in 2013 in parallel with two other models built on a single base - Honda CB500F and Honda CB500X. All three models share a common platform, including the engine, and differ only in design, ergonomics and suspension settings. In all other respects, these are almost identical motorcycles.

The appearance of the Honda CBR 500R was driven by Honda's desire to offer the market a budget model with a sporty appearance, ideal for novice drivers with a category of A2 (according to European classification) rights. Well, for those who prefer other classes of motorcycles, you can choose another - for example, in the "naked" style ( CB500F) or the currently popular "tourist enduro" ( CB500X).

The basis of the Honda CBR500R was taken from an in-line 2-cylinder liquid-cooled engine with a volume of 471 cc, producing up to 48 hp. power and 43 Nm of torque. This motor unchanged goes to the entire new CB500 model line. A retuned version of this engine is put on Honda Rebel 500.

Of the features of the Honda CBR500R, a steel frame, disc brakes (there are versions with ABS), simple suspensions in the form of a conventional telescopic fork at the front and a monoshock at the rear, a second power injection system, a 6-speed gearbox and up to 195 kg of curb weight should be distinguished.

In 2016, the Honda CBR500R model underwent restyling, receiving an updated appearance and several technical changes: the fuel tank increased from 15.7 to 16.7 liters, the front fork received preload adjustment, the rear shock absorber slightly changed its characteristics, the brake and clutch levers were adjusted. , the motorcycle was now equipped with LED optics.

Currently, the Honda CBR500R model is manufactured in Thailand and sold in many countries around the world - in the European, Asian, American and other markets.

The officially declared fuel consumption of the Honda CBR500R is 3.5 liters per 100 kilometers. The exact value depends on the riding style.