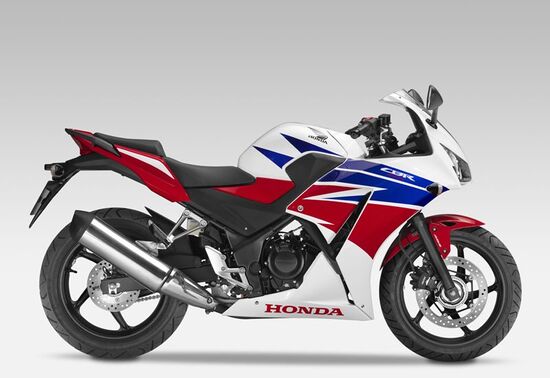 The Honda CBR 300R budget sports bike was announced in 2013, and production and sales began at the end of 2014. The motorcycle replaced Honda CBR250R in Europe and North America, while in Asia CBR250R received a restyling and was visually no different from the Honda CBR300R.

Unlike its predecessor, the new CBR 300 received an updated look, a new exhaust system and a larger engine (249.6 cm³ -> 286 cm³) - a new piston, connecting rod and crankshaft). As a result, the maximum power increased to 30 hp, and the torque - up to 27 Nm. This engine was subsequently also installed on the model - Honda Rebel 300.

On the chassis and frame, the model has not undergone changes - a steel frame, a conventional 37 mm telescopic fork and a monoshock, disc brakes (versions with a combined brake system + ABS are optionally available).

Despite the fact that the Honda CBR300R was inferior in maximum power Kawasaki Ninja 300 and was equipped with a 1-cylinder engine, many experts and critics noted the best torque at low and medium revs, ease and ease of control, as well as very efficient braking system (especially on CBR300RA versions with combined braking system + ABS).

The Honda CBR300R is currently available in the US market while no longer available in Europe. In the markets of Japan and Asia, this model was never sold; instead, a restyled Honda CBR250R was available, which differed from the CBR300R only in engine size.

The main competitors of the Honda CBR 300 in the class:

The officially declared fuel consumption of the Honda CBR300R is 3.31 liters per 100 kilometers. The exact value depends on the riding style.