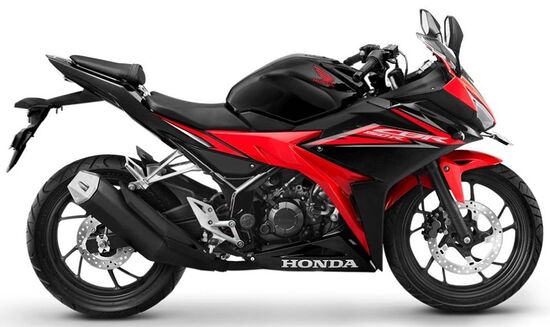 The Honda CBR150R small sports motorcycle appeared in Thailand in 2002 and was aimed at sales in developing Asian countries. The model was not officially supplied to developed countries, but some of the motorcycles ended up in them through the efforts of private importers.

In 2010, the model is undergoing a restyling, receiving visual features Honda VFR1200F and fuel injection system. The size of the wheels increases, and the dashboard becomes digital.

In 2015, the Honda CBR150R is redesigned and features Honda CBR600RR. On the technical side, the model has practically not changed in any way.

For 2017, the model gets exterior changes and a new, longer-stroke engine again.

Of the key features of the Honda CBR150R, a steel diagonal frame, simple suspensions in the form of a conventional telescopic fork and mono-shock absorber, a 1-cylinder liquid-cooled engine and an injection power system (since 2010), a 6-speed gearbox and from 123 kg of curb weight should be distinguished.

The main competitors of the Honda CBR 150 in the class:

The officially declared fuel consumption of the Honda CBR 150 is 2.85 liters per 100 kilometers. The exact value depends on the riding style.