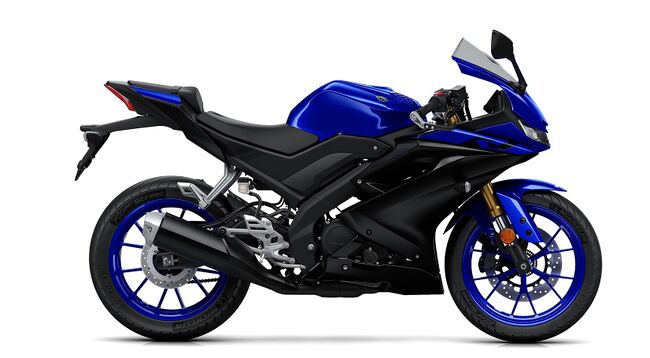 The Yamaha YZF-R125 was first introduced in 2008 and is still in production today. The model positions itself as a motorcycle for young novice motorcyclists with a driver's license category A1 and as the initial model of the YZF-R sports line. The motorcycle is produced and sold mainly for the European market.

In 2014, the Yamaha R125 (YZF-R125) model underwent its first restyling, receiving an updated plastic appearance, a new wheel disc design, an exhaust system, a front brake (a 4-piston radial caliper instead of a conventional 2-piston one), a fuel tank (11, 5 liters instead of 13.8 liters), a new front suspension (inverted fork with 41 mm stays instead of the usual 33 mm fork).

In 2018, the model undergoes a restyling again, receiving a new design of plastic, headlights, dashboard and exhaust. Rear tire width is increased to 140 mm (instead of 130 mm). The model also gets an updated engine, which received a VVA (Variable Valve Actuation) system, which changes valve lift depending on engine speed, and an Assist & Slipper clutch system (assistant and slipping clutch). Although this model has been available since 2018, it is marketed as the 2019 Yamaha YZF-R125.

The main feature of the motorcycle is a 1-cylinder liquid-cooled injection engine producing 15 hp. power and 12.2 Nm of torque. This engine was also installed on the Yamaha WR125R and Yamaha WR125X models.

On the platform of the second generation Yamaha YZF-R125, a naked model was also built - Yamaha MT-125.