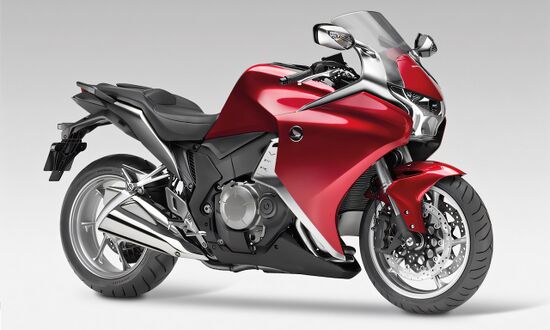 The Honda VFR1200F sports tourist model was first introduced as a concept at the 2008 Intermot show in Cologne. Production of the model started at the end of 2009, and official deliveries of motorcycles began in 2010. Honda VFR1200F has positioned itself as the "big brother" Honda VFR800F and as the flagship model of the VFR line.

The Honda VFR1200F was based on a specially designed 4-cylinder V-twin liquid-cooled engine with a volume of 1237 cc, producing 173 hp. power and 129 Nm of torque. The layout of the engine is such that the camber angle of the cylinders is not 90 °, but 76 °. In addition, the pairs of cylinders are not strictly opposite each other, but are spaced apart on the sides. Also, due to the change in the crankshaft angle and the sequence of flashes in the cylinders, the motor is practically devoid of vibrations, and at the same time does not have a balance shaft. The timing system is chain-driven and the valves are rocker-driven, allowing only one camshaft per cylinder head.

In addition to the basic version of the motorcycle, a modification with an automatic transmission (DCT - dual clutch transmission) was also presented, which had the designation `` Honda VFR1200FD (in the North American market - Honda VFR1200FA).

Other features of the motorcycle include an aluminum frame, adjustable suspensions, a cantilever rear swingarm (which is a signature feature of almost all VFR motorcycles), powerful combined 6-piston radial brakes with ABS, an 18.5 liter fuel tank, cardan drive and 268 kg of curb weight. masses (on the version with a manual transmission).

In 2012, the Honda VFR1200F model underwent minor changes, receiving a traction control system (TCS), other camshafts (Japanese versions), as well as settings for the control unit (ECU) and automatic transmission (DCT). The fuel tank capacity has been increased from 18.5 to 19.0 liters.

The lineup of the Honda VFR series:

The official declared fuel consumption for the Honda VFR1200F is 6.53 liters per 100 kilometers. The exact value depends on the riding style and the load on the motorcycle.