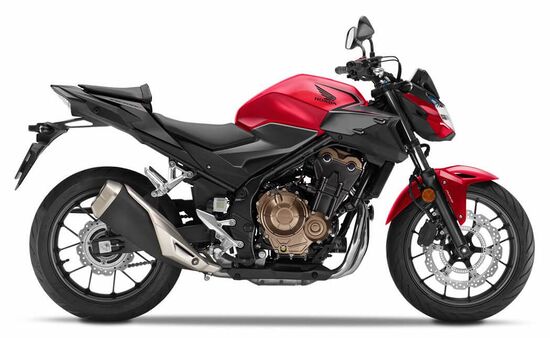 The naked model Honda CB500F was first presented in 2012 at the EICMA show in Milan. This motorcycle has nothing to do with the Honda CB500 model from 1994 to 2002 and is a completely different motorcycle.

At its core, Honda created a unified platform for the creation of budget motorcycles of various classes, which were supposed to fill the niche of low-cost and beginner motorcycle models with the European A2 driver's license category. So, in parallel, other versions were proposed - Honda CBR500R (sports) and Honda CB500X (enduro-tourist). These models are built on a common base, have the same engine and differ only in design, equipment and chassis characteristics.

The Honda CB500F was based on a specially developed in-line 2-cylinder liquid-cooled engine with a volume of 471 cc, producing about 48 hp. power and 43 Nm of torque. The reconfigured version of this engine is also installed on the cruiser Honda CMX500 Rebel.

In 2016, the Honda CB500F undergoes a slight restyling, receiving an LED headlight and a brake light, increasing the capacity of the fuel tank by 1 liter, receiving new suspensions (the front fork is now adjustable for preload) and a more modern exhaust shape.

Currently, the Honda CB500F model is produced in Thailand and sold in many countries around the world - Europe, North America, South America, Asia, Australia, etc.

The main competitors of the Honda CB500F in the class:

The officially declared fuel consumption of the Honda CB500F is 3.5 liters per 100 kilometers. The exact value depends on the riding style.