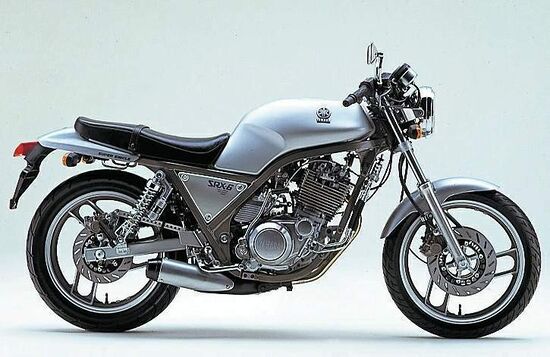 The Yamaha SRX600 appeared in 1986 and was intended primarily for the European and North American markets. The SRX series was an offshoot of the SR series, and was intended for a sportier ride, but the archaic engine and generally vague concept led to the fact that the model was practically out of demand.

By 1988, production of the SRX 600 was halted, and in 1991 it was restarted with a new restyled version of the motorcycle, which was only sold in the domestic Japanese market. The Yamaha SRX 600 was based on a 1-cylinder air-cooled 608 cc engine producing 42 hp. power and 48 Nm of torque. The maximum performance is at 5500-6500 rpm.

In parallel with the SRX600, there was an internal Japanese modification on the market - Yamaha SRX 400. Both models are almost identical to each other and differ only in the engine, dimensions and braking system (the first versions of the SRX600 were equipped with a double disc front brake).

In 1991, the Yamaha SRX 600 model undergoes restyling, receiving an updated appearance, a new front fork, a new rear suspension (monoshock instead of a double shock absorber, 9 steps of preload adjustment instead of 5), new 17 'wheels, a reduced fuel tank (14 l instead of 15 liters), a fully transistor ignition system (instead of CDI) and an electric starter (previous versions were equipped only with a "kick"). The model name is changed to Yamaha SRX600 (instead of the old one - Yamaha SRX-6). The same year was the last year of production.

The main competitors of the Yamaha SRX 600 in the class: