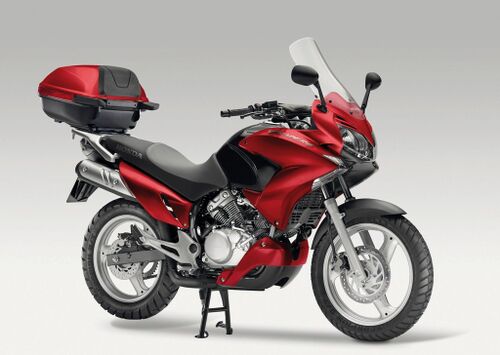 The touring enduro model Honda XL 125 V Varadero was first introduced in 2001 and was produced primarily for the European market at the Honda plant in Montesa (Spain). The model positions itself as a universal motorcycle for beginners and the younger brother of the flagship version - Honda XL1000V Varadero.

As conceived by marketers, the Honda XL125V Varadero could become very popular, since it offered the market almost the only small-sized motorcycle of the "tourist enduro" class, which is distinguished by normal dimensions and an "adult" layout (V-twin, 17.5 liter tank, long-travel suspensions, plastic fairings in the style of Varadero 1000).

The basis of the Honda XL125V Varadero was a 2-cylinder V-twin liquid-cooled engine, 125 cc, producing 15 hp. power and 10.6 Nm of torque. This motor was new and was developed specifically for the Honda VT125C Shadow cruiser. The maximum performance of the motor is reached at 8500-11000 rpm.

The frame of the Honda XL125V Varadero is a tubular steel structure with an aluminum swingarm from Honda XL650V Transalp. Suspensions are presented in the form of a conventional telescopic fork at the front and a monoshock at the rear, travel - 132 and 150 mm, respectively.

Particular attention should be paid to the fuel tank, the capacity of which was 17.5 liters, which was atypical for a motorcycle of this volume, and allowed to drive more than 400 km without refueling.

The main generations of the Honda XL125V Varadero:

2011 was the last year of production of the Honda Varadero 125. Official sales continued until 2013, after which the model disappeared from dealers. The motorcycle was never replaced. Instead, Honda began to develop road and sports (plastic) versions of the small cubic models, which were in better demand and more suited to the modern market. Nevertheless, the model Honda XL125V Varadero was very interesting and had no weak points - of the shortcomings, only the high price was noted by critics.

The main competitors of the Honda XL125V Varadero in the class:

The average real fuel consumption for the Honda XL 125 V Varadero, according to the owners, ranges from 3 to 4 liters per 100 kilometers. The exact value depends on the riding style.