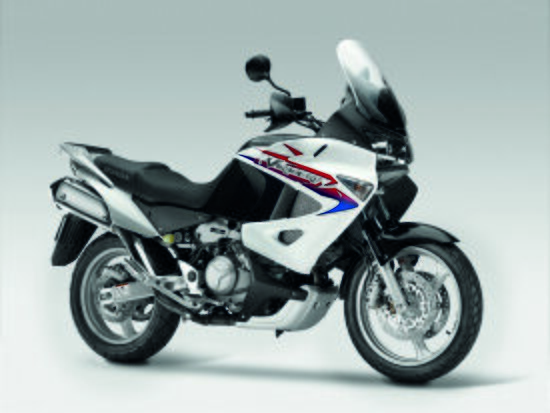 Since 2003, the model has received a number of significant technical and visual changes. In particular, the fuel injection system, a 6-speed gearbox, new suspensions (new springs in the fork and a rear shock absorber with reduced travel), as well as a new generator stator (increased output power).

Subsequent updates to the model were minor, so it is logical to divide the entire production cycle of the Honda XL1000V Varadero into 2 generations - before 2003 and after 2003.

The basis for the Honda XL 1000 V Varadero was a liter engine from the sports model Honda VTR1000F, which was refined from year to year and brought to modern standards of efficiency and environmental friendliness. In addition, it was significantly derated and reconfigured, due to which the maximum power was noticeably reduced, but the torque increased from low and medium revs. As a result, the motor began to produce 94 hp. power and almost 99 Nm of torque. The maximum engine performance was reached already at 6000-8000 rpm.

Key features of the Honda XL1000V Varadero include a steel frame, cable clutch, conventional suspensions in the form of a simple telescopic fork in front and a progressive swingarm with a mono-shock absorber at the rear, a combined braking system, the presence of versions with ABS (denoted as `` XL1000VA ), 6 -step gearbox (since 2003), chain drive and from 220 kg "dry" mass.

The Honda XL 1000 V Varadero was the flagship enduro tourist and was considered the "big brother" of the Transalp line. In 2012, the model was discontinued, and it was replaced by Honda VFR1200X Crosstourer, radically different from the Varadero and built on the basis of the engine from the sports tourist Honda VFR1200F.

The main modifications of the model:

The "little brother" of the model is Honda XL125V Varadero.

The main competitors of the Honda XL1000V Varadero in the class:

Average fuel consumption for Honda XL1000V Varadero, according to test results, is 5.5-6.4 liters per 100 kilometers. The exact value depends on the riding style.