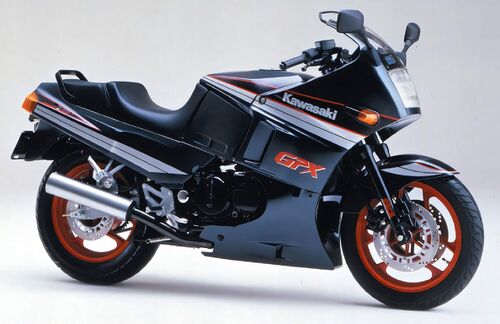 The Kawasaki GPX400R sports bike model appeared in 1987 as the successor to the Kawasaki GPZ400R. However, despite this, both models were produced in parallel until 1990, until they were replaced by Kawasaki ZZ-R400 and Kawasaki ZXR400.

Unlike the GPZ400, the new GPX400 model received a steel frame (instead of an aluminum one), which was called FAST and was close in performance to an aluminum one. Also the engine from GPZ400 has been significantly redesigned and lightened and installed in the GPX400. By the way, in 1989 the model GPZ400 gets this engine, as well as the chassis from the GPX400. The braking system has also undergone changes - instead of 1-piston calipers, the model receives more efficient 2-piston calipers. The AVDS anti-peel system is replaced by an electric ESCS (with a solenoid valve). Instead of conventional capacitor ignition (CDI), a digital transistor was installed.

1989 was the last year of production for the Kawasaki GPX400R, after which it was discontinued. Thus, the model existed for about 3 years, which made it a rather rare model, even in Japan. On the Russian market, the Kawasaki GPX 400 is practically not found.

The minimum fuel consumption for the Kawasaki GPX 400 can reach 4-5 liters per 100 kilometers, the maximum is 10-12 liters. The exact value depends on the riding style and the condition of the motorcycle.