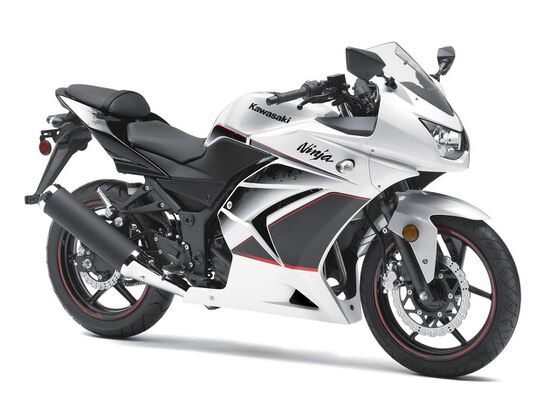 The Kawasaki Ninja 250R budget sports bike appeared in 2008, replacing Kawasaki ZZR 250. The motorcycle has been targeted at many countries around the world, selling in the Asian, European, North American and South American markets.

Unlike ZZR250, the new Kawasaki Ninja 250R gets a more modern look and a redesigned engine (mainly to meet environmental standards), producing up to 32 hp. power. From the outset, the model was equipped with electronic fuel injection, but the North American versions (designation - EX250J) had carburetors. Since 2013, all versions of the Kawasaki Ninja 250R have had a fuel injection system. This engine was subsequently also installed on - Kawasaki Z250.

The chassis of the Ninja 250R is very similar to its ancestor Kawasaki ZZR 250: a conventional fixed telescopic fork at the front, a progressive monoshock (with preload adjustment) at the rear, disc brakes and a 6-speed gearbox.

In 2013, the model undergoes a restyling and changes its name to Kawasaki Ninja 250 . The new model features a new plastic and dashboard design, a dual-throttle injector, an exhaust pattern, ABS versions, a wider rear tire and a slightly smaller fuel tank (17.0 liters instead of 17.8 liters). In the same year, the Kawasaki Ninja 300 model appeared, which in a number of countries (Europe, North America, etc.) began to be sold instead of the new Kawasaki Ninja 250.

In 2018, Kawasaki introduced a completely new generation of the Kawasaki Ninja 250, which replaced the previous model and the Kawasaki Ninja 300. The updated version has a more aggressive appearance, with a capacity of 39 hp, a chassis, a 14-liter fuel tank and a number of other changes.

Major generations of the Kawasaki Ninja 250: