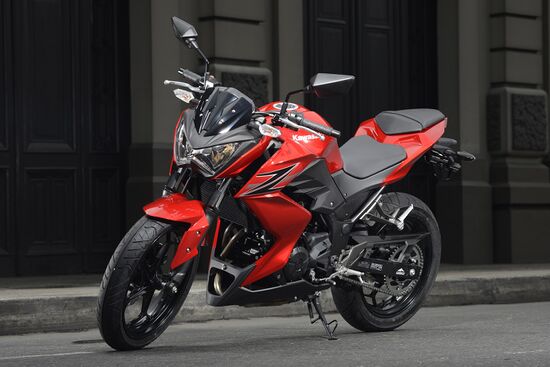 Kawasaki Z250 appeared in 2013 as a budget representative of the Kawasaki Z-series road bikes. The model was mainly focused on the Asian market and was practically not supplied to European countries.

The Kawasaki Z250 is based on the second generation Kawasaki Ninja 250R sports model, inheriting the frame, engine and chassis.

The frame of the motorcycle is a tubular steel structure, the suspensions are a conventional telescopic fork at the front and a progressive monoshock at the rear. Brake system - disc, front 1 disc 290 mm, rear - 1 disc 220 mm. Calipers - 2-piston.

Since 2015, based on Kawasaki Ninja 300, a new model has been proposed - Kawasaki Z300. In the Asian market, the Z250 version continued to be sold, which by this year received minor changes - ABS in standard equipment, as well as a slipping clutch with an assistant (Assist & Slipper Clutch).

As of 2018, the Kawasaki Z250 is out of production (there is a 2017 model on the market), although no end of production has been announced. Most likely, the resumption of production will be in the near future.

The main competitors of the Kawasaki Z250 in the class: