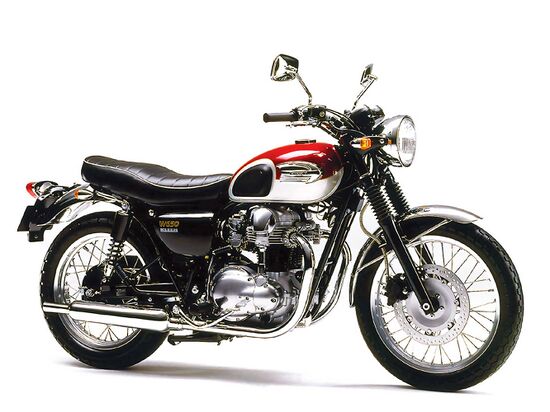 The Kawasaki W650 '' begins its history in 1999 and is produced until 2008 inclusive. Despite the similarity of names and appearance, this motorcycle has nothing in common with a similar model produced in the late 60s of the last century.

The Kawasaki W650 was mainly aimed at the markets of Japan and Europe, although it was sold in North America for the first 4 years (the model showed low sales, and by 2004 it was completely removed from the US model line of motorcycles). A version Kawasaki W400 was also available for the Japanese market, differing only in engine size.

The Kawasaki W650 was based on an inline 2-cylinder air-cooled engine with a volume of 676 cc. see, giving out 50 hp. power and 56 Nm of torque. Of the features of the model, an abundance of chrome parts, the presence of a kick starter (an electric starter was also present) and disc hydraulic brakes in the front (rear - drum) should be highlighted.