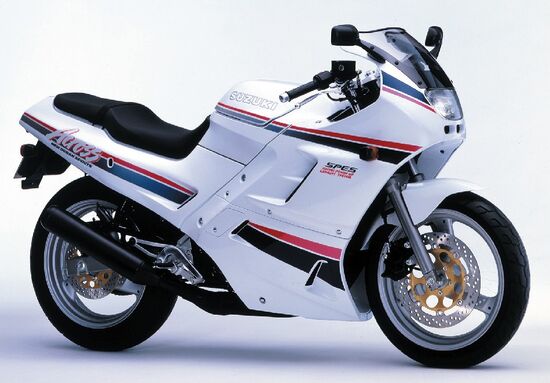 Suzuki GSX 250 F Across was first introduced at the 1989 Tokyo Motor Show, and official production and sales began in 1990. The model was aimed at the domestic Japanese market, but since 1991 it has been officially supplied to Australia.

The Suzuki GSX250F Across has positioned itself as an inexpensive, low-volume motorcycle, perfect for novice riders who prefer sporty models. The motorcycle was quite comfortable and practical - the suspensions were tuned for a soft, comfortable ride, and the ergonomics suggested a fairly straight and comfortable fit. In addition, the fuel tank was located under the seat, and a raised tank in the front gave access to a large trunk that could fit a standard-sized helmet.

The Suzuki GSX250F Across was based on an in-line 4-cylinder liquid-cooled engine with a volume of 248 cc, producing up to 45 hp. power and approximately 26 Nm of torque. Since 1993, Japanese legislation has been changed and, according to the new rules, the maximum power did not exceed 40 hp. The engine did not become an independent development, but in a reconfigured form it passed from the sports model - Suzuki GSX-R250.

Among the features of the Suzuki GSX250F Across are a steel frame, simple suspensions in the form of a conventional telescopic fork and a progressive monoshock, disc brakes, a 6-speed gearbox, a 12-liter fuel tank and 163 kg of dry weight.

1998 was the last year of production of the model, after which it finally left the market and did not receive further development. Subsequently, all Japanese motorcycle manufacturers abandoned the concept of small-capacity motorcycles with a 4-cylinder engine, preferring simpler, cheaper and more reliable 1- and 2-cylinder models.

The main competitors of the Suzuki GSX 250 F Acros in the class: