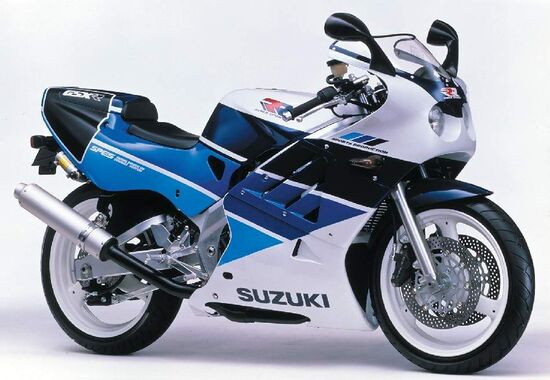 The Suzuki GSX-R 250 hit the market in 1987 as the youngest version in the GSX-R sports line. It was based on an in-line 4-cylinder liquid-cooled engine with a volume of 248 cm³, producing 45 hp. power and 24 Nm of torque.

The engine is high-powered, revolving, with maximum performance from 10,000 to 15,000 rpm. This motor was subsequently installed on models such as Suzuki GSF250 Bandit and Suzuki GSX250F Across.

In 1988, in addition to the regular version of the Suzuki GSX-R250, a track modification is offered - ' Suzuki GSX-R250 SP . It featured a Yoshimura exhaust system and plastic decals. In 1989, the model is slightly changed (the size of the turn signals is reduced, the muffler is equipped with an aluminum trim, a hook for securing luggage appears), and the SP version is no longer offered. At the same time, a new generation appears, which added the letter R in the name - ' Suzuki GSX-R250R . This model is distinguished by an aluminum frame, four 32 mm carburetors (instead of two 27 mm carburetors), a thicker front fork (41 mm instead of 38 mm), a new braking system (front 300 mm discs with 2-piston calipers were replaced by 290 mm discs and 4-piston Tokico calipers), a new look. Also offered and "track" modification - Suzuki GSX-R250R SP. It was distinguished by the possibility of additional adjustment of the suspensions (by rebound), a plug in the passenger seat and original Suzuki racing colors.

1989 was the last year of production of the Suzuki GSX-R250, after which it finally left the market and did not receive further development. Subsequently, all Japanese manufacturers abandoned the concept of small in-line 4-cylinder models, moving to a simpler, more reliable and cheaper layout with one or two cylinders.

The main competitors of the Suzuki GSX-R250 in the class: