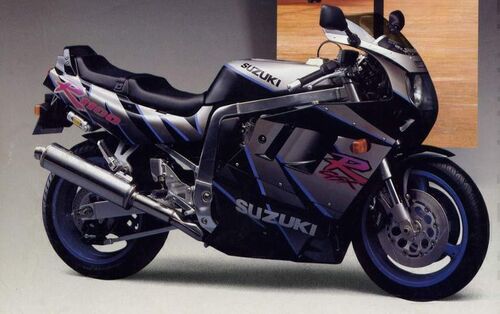 Suzuki GSX-R 1100 first appeared in 1986 based on the Suzuki GSX-R 750 model, but with a more powerful engine. The Suzuki GSX-R 1100 was inspired by Suzuki's desire to bring a powerful yet responsive and lightweight sports bike to the market. And at some point they really succeeded - the motorcycle received many positive reviews from experts who noted the power, relatively light weight and decent handling. However, over time, and in particular with the release of the Honda Fireblade, many realized that the handling of the Suzuki GSX-R 1100 was not the benchmark and there could be bikes with better handling and lower weight for comparable power. By the way, Suzuki understood this and constantly made changes to the frame and chassis of each new modification of the Suzuki GSX-R 1100, trying to find a compromise. So, the early versions of the Suzuki GSX-R 1100 are distinguished by a lighter weight, but a less rigid frame, which makes itself felt under high loads; later versions had a more rigid frame and sharp control, but suffered from excessive weight. By the way, this is the reason for the different estimates of the reviews of experts testing different versions of the motorcycle over the years.

In 1989, the Suzuki GSX-R1100 received a major overhaul. In particular, the steel frame was replaced with an aluminum one. The engine increased its volume from 1052 to 1127 cc and received new Mikuni BST36SS carburetors. Also, models from this year are distinguished by black calipers.

In 1990, the model receives minor ergonomic and cosmetic changes, as well as a new inverted fork.

Since 1991, the model has changed its appearance, and in particular the design of the headlight and fairing. The aerodynamic characteristics are improved.

The next major changes to the Suzuki GSX-R1100 model took place in 1993, when the air engine was replaced with a new one - with a liquid cooling and a slightly reduced volume to 1074 cc. Maximum power increased to 155 hp. The frame has been updated, which has become more rigid. The 4-piston calipers were replaced with 6-piston calipers. The dimension of the wheels has changed - instead of 18 'disks, the motorcycle has received more modern and wide 17' wheels. The fuel tank capacity on all versions except California was 21 liters.

In the period from 1994 to 1998. there were no major updates to the model. The changes concerned mainly aerodynamic elements and engine settings (to improve the torque characteristics).

The Suzuki GSX-R 1100 was sold until 1998, after which production was discontinued. Suzuki took a break in the production of large-capacity sports motorcycles, and only in 2001 introduced the flagship model Suzuki GSX-R 1000, which is still being produced.

The main competitors of the Suzuki GSX-R 1100 in the class: