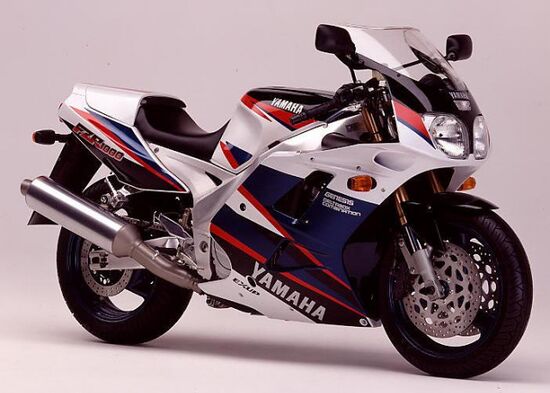 The Yamaha FZR 1000 sports bike model dates back to 1987, when the Yamaha FZR1000 Genesis was launched on the market, producing 136 hp at that time. power.

In the first year of its release, the model won the Castrol Six Hour race and began to rapidly gain popularity. Already by 1989, the motorcycle was slightly updated in appearance, received important modifications to the engine and the EXUP system - an electrovalve in the exhaust manifold, which changes the exhaust section depending on the engine speed. As a result, the maximum power increased to 145 hp, and the power / torque graph became smoother. The word - EXUP has been added to the model name. In 1991, the conventional telescopic fork was replaced with an inverted one (Kayaba), and the double round headlights were replaced by a single rectangular one. The last changes were made in 1994, when the Yamaha FZR 1000 received new headlights ("fox eyes"), a modified front fork and 6-piston front calipers.

The model was focused mainly on the markets of North America and Europe, but in the period from 1994 to 1995. was officially sold in Oceania - Australia, New Zealand, etc. The FZR1000 left the market due to the appearance of the Honda CBR900RR Fireblade model, which was slightly inferior in dynamics, but was much lighter and more manageable. The Yamaha FZR1000 was replaced by a new model Yamaha YZF1000R Thunderace, however, Yamaha was able to give a decent answer to the release of the Honda Fireblade only by 1998, having launched the model Yamaha R1.

The main competitors of the Yamaha FZR 1000 in the class: