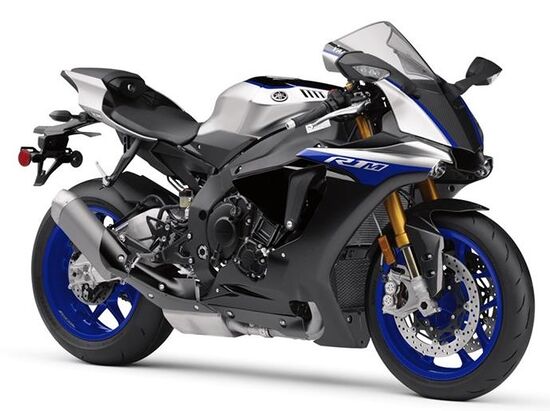 The flagship sports bike, Yamaha YZF-R1, was first unveiled on September 15, 1997 at the EICMA show in Milan.

This motorcycle became the successor of Yamaha YZF1000R Thunderace (despite the fact that both models were produced in parallel for some time, Thunderace began to be positioned on the market as a sports tourist), received a new frame, a new generation of Genesis engine, a fork inverted and improved track performance - ergonomics, reduced weight, improved handling, increased engine power.

By 2000, the Yamaha R1 is undergoing its first restyling. Despite the fact that there were practically no visual changes, the model was significantly different from the previous generation. The curb weight decreased by 4 kg, the exhaust system became titanium, the aerodynamics improved (by 3%), the shape of the windshield changed (for better wind protection for the pilot), the fuel tank received more comfortable foot recesses, the seat and the position of the footpegs were changed (to shift the weight distribution forward ), the engine and transmission changed: the camshafts received additional oil channels, the pusher clearances decreased (all this led to a decrease in friction and engine noise), the gearbox received a completely revised gearshift system (the problem with the gearbox inherent in early versions of R1 was solved).

2002 was marked by the second update of the Yamaha YZF-R1, which consisted of replacing the carburetors with an injector and significantly flattening the power take-off curve over the entire engine range. The past generation was distinguished by the fact that from 3000 rpm there was a sharp increase in torque, which in racing on the track or simply when using a motorcycle for civilian use, leads to loss of control, falls and injuries to the pilots. The engine received new liners, which reduced oil consumption. The new Deltabox frame generation, with minimal weld seams, has increased structural rigidity by 30% while making the frame even lighter and more compact. The exhaust system changed its configuration from 4-in-1 to 4-2-1. The rear brake light is now LED. The front fork becomes thicker (41 → 43 mm).

In 2004, the model is renewed again with a new design with an under-seat exhaust system and radial front calipers (the diameter of the brake discs also increases: 298 → 320 mm). The new engine with a higher compression ratio and a shorter stroke increases power to 172 hp. For the first time, an inertial boost system (Ram-Air) is used. The injection system has dual injectors. Already in the base, the motorcycle is equipped with a steering damper. Changed frame geometry and bike weight distribution to reduce the wheelie effect.

In 2006, the Yamaha R1 changed slightly with engine optimization (+3 HP) and a 20mm swingarm (to stabilize the bike more under heavy acceleration). The frame has changed. Motorcycles are equipped with a slip clutch system.

In 2007, the model was significantly updated, having received changes in appearance and technical part. The model received an electronic throttle (YCC-T - Yamaha Chip Control Throttle) and an automatically variable intake manifold length (YCC-I - Yamaha Chip Control Intake). The compression ratio of the engine was increased, the 5-valve cylinder head was replaced with a traditional 4-valve one. The maximum power rises to 180 hp. The front braking system changes to 6-piston radial calipers and 310 mm discs.

Since 2009, the Yamaha R1 model has undergone another major restyling. The appearance of the motorcycle is changing. The model gets a new engine with a cross-crankshaft (Crossplane technology), on which the connecting rods are located at half angles of 90 ° to each other and the flashes are spaced 270 ° -180 ° -90 ° -180 °. This design endowed the engine with a special sound similar to the sound of a V-shaped 4-cylinder engine and, as promised by Yamaha, gave the motorcycle virtually two motors in one, providing powerful traction from the bottom like a V-shaped engine and record power at the top. like in-line "fours". In addition, the engine became even shorter-stroke and increased power to 182 hp. Also, the motorcycle got the opportunity to choose from three engine operating modes - the D-Mode (Selectable Drive Mode) system. New rear shock absorber with more comfortable adjustment. Minor changes in the frame. New magnesium subframe. New electronic steering damper. Since 2012, the model has been additionally equipped with traction control - the TCS (Traction Control System) system.

The main competitors of the Yamaha R1 (YZF-R1) in the class: