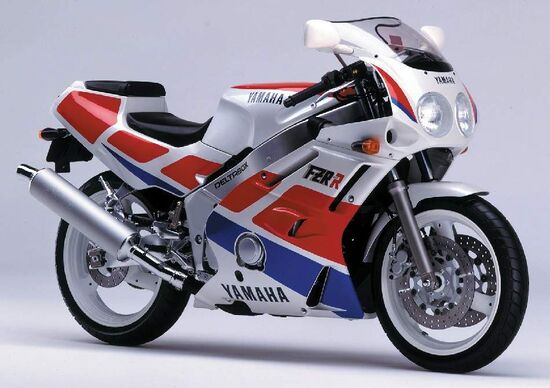 The motorcycle was available not only in Japan, but in certain years it was sold in foreign markets - North America and Europe. The first versions of the Yamaha FZR 400 had a steel frame, a Genesis engine without EXUP (a solenoid valve in the exhaust manifold that changes the exhaust section depending on engine speed) and 2-piston front brakes. In addition to the main version, a sports modification was almost always offered in parallel (it differs in the R, RR, SP indices in the name), which had more advanced components, other gearbox settings and positioned itself as a version for the track. Subsequently, in the process of restyling, the basic version received more and more components from the sports version, which led to the fact that in the early 90s the basic modification left the market, completely giving way to the track version.

Among the features of the Yamaha FZR 400 are an aluminum Deltabox frame, an in-line 4-cylinder Genesis engine (the cylinders are tilted forward as much as possible, which contributed to a lower center of gravity and increased handling of the motorcycle), powerful 4-piston front brakes, an inertial boost system and about 185 kg of curb weight ...

The model was discontinued in 1994 and did not receive further development. One of the reasons for the refusal of all the Japanese "four" from high-powered small-cubic sports motorcycles was a low engine resource and rather expensive production (often 400-cc versions had most of the components and technical solutions from older versions).

The main competitors of the Yamaha FZR400RR in the class: