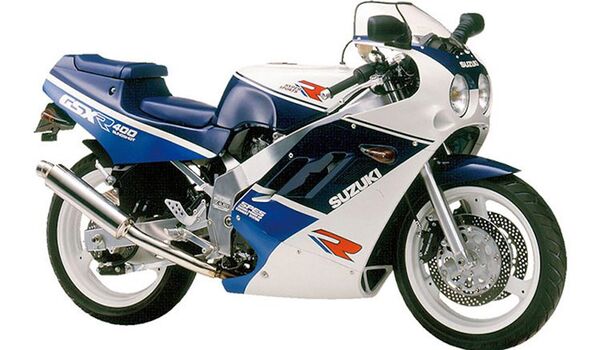 Suzuki GSX-R 400 appeared in 1984 (generation GK71B). The then model was distinguished by an aluminum frame, a powerful 59 hp engine. and a record dry weight of 152 kg. The model had a rather archaic appearance (by modern standards), nowadays it is practically not found on the market.

The first major changes to the motorcycle took place in 1986 (the '' GK71F generation). The model received a new look with a rectangular headlight, a new exhaust system, new brake discs and a new generation of aluminum frame. The wheelbase is shorter and the power-to-weight ratio has been increased to 0.39 hp. per 1 kg of weight. The engine receives a proprietary cooling system using a combination of liquid, air and oil (SATCS - Suzuki advanced three-way cooling system).

In 1987, the generation remained the same - GK71F. However, the model changed again. The Suzuki GSX-R 400 has returned to double round headlights (the previous rectangular design was in low demand). The exhaust system, calipers and wheel dimensions have also been updated. There was a "track" modification SP (Sports Production), which was distinguished by a sticker on the plastic, the gear ratio in the gearbox, additional suspension rebound adjustment and a rear shock absorber with a remote reservoir.

The year 1988 was marked by another serious restyling of the Suzuki GSX-R400 (generation GK73A). The model features a more modern design, a new exhaust system, a new generation of aluminum frame, new 4-piston Tokico calipers, a new curved radiator and new carburettors. In 1989, the letter R 'is added to the model name - Suzuki GSX-R400R.

In 1993, due to the update of Japanese legislation, the maximum power of the Suzuki GSX-R400 was reduced to 53 hp, and 1995 was the last year of production of the model.

The Suzuki GSX-R400 engine was subsequently installed on models such as Suzuki GSF400 Bandit and Suzuki RF400.

The main competitors of the Suzuki GSX-R400 in the class: