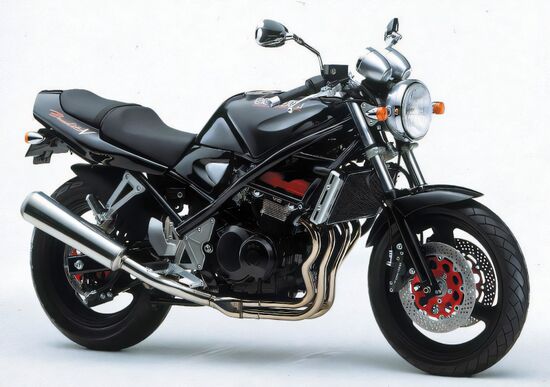 The Suzuki GSF 400 Bandit appeared in 1989 and was initially only available in the domestic Japanese market. Since 1991, the model has been officially supplied to the countries of Europe and North America. In the Russian market, in the overwhelming majority of cases, there are domestic Japanese modifications.

The Suzuki Bandit 400 was based on an in-line 4-cylinder liquid-cooled engine with a volume of 398 cc, producing 59 hp. power and 38 Nm of torque. Since 1993, due to a change in Japanese legislation, the maximum engine power has been reduced to 53 hp. This motor was not developed independently, but migrated from the sports model Suzuki GSX-R400.

In 1991, Suzuki GSF400 Bandit introduces a new engine modification with a variable valve control (VC - variable valve control). Due to the characteristic red color of the cylinder head cover, this modification was called "red-headed", and the usual modification with a simple engine without this system is called "gray-headed". Both modifications existed on the market in parallel for almost the entire period of the model's production. The "red-headed" modification also differs with red brake discs (inner side) and the presence of the letter "V" in the factory designation. This engine was also installed on a sports tourist - Suzuki RF400.

In 1995, the model undergoes a minor restyling, receiving an aluminum swingarm, suspension settings, a new seat and a retuned VC variable valve timing system. This generation is also distinguished by the frame number - GK7AA. The last generation had a frame with an index - GK75A.

1997 was the last year of production for the Suzuki Bandit 400, although official sales of new motorcycles continued until 2000.

Currently, the model is very popular in Russia as one of the cheapest Japanese motorcycles for beginners. The motorcycle is also in large quantities at Japanese auctions.

The main competitors of the Suzuki GSF400 Bandit in the class: