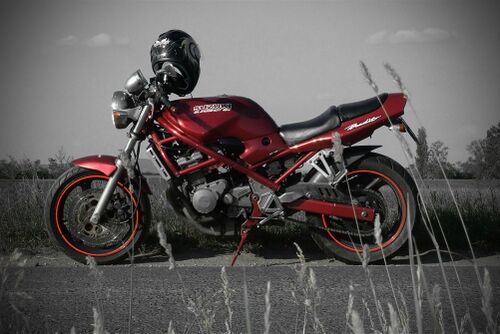 Suzuki GSF 250 Bandit appeared in 1989 along with the older version Suzuki GSF400 Bandit. Both models have a lot in common, although they are built on different engines and differ in equipment. For example, the Bandit 250 has undergone the same restyling and updates as the Bandit 400. In addition, there were "red-headed" versions of the Suzuki GSF250 Bandit with a variable timing system (VC - variable valve control).

Although the Bandit 250 was originally intended only for the domestic Japanese market, in 2000 it was also produced for the Australian market.

In 1995, the Suzuki GSF250 Bandit underwent a restyling with an updated look, an aluminum swingarm, and versions with a VC ("redhead") engine.

Over time, all Japanese motorcycle manufacturers abandoned the concept of small-capacity motorcycles with in-line 4-cylinder engines. Despite the excellent dynamic performance, such models did not have a sufficient engine resource and were quite expensive. As a result, Japanese small-cubic models received simpler (1-2 cylinder), but more resourceful engines and began to have cheaper equipment, which significantly expanded the sales market and made these models available to a wide masses of consumers (including in the role of the first motorcycle).

The main competitors of the Suzuki GSF250 Bandit in the class: