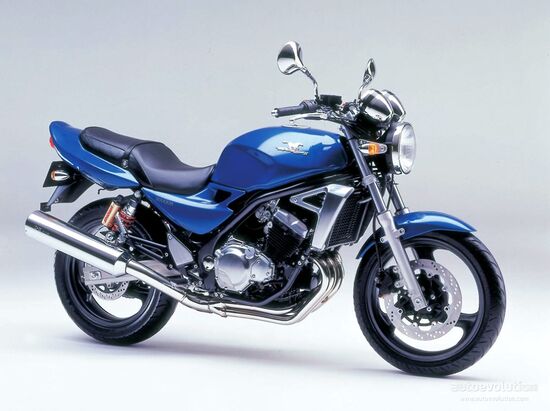 The Kawasaki Balius 250 road bike model appeared in 1991 and was produced until August 2007. The motorcycle was focused on the domestic Japanese market and was not officially supplied to other countries. The model is also known by the names - ZR250, ZR-2. The prefix "Balius" (in Greek mythology - Βάλιος) is the name of one of the immortal talking horses, the son of the harpy Podarga and the god of the west wind Zephyr, brother of Xanthus (Ξάνθος). The prancing horse emblem and the Balius name were placed on the fuel tank of many Kawasaki ZR250 Balius models, but some models do not have this emblem, but received a simple KAWASAKI nameplate.

The first modifications of the Kawasaki Balius 250 were based on the engine from the sports version Kawasaki ZXR 250, but over time it was reworked and lost its "sports roots", reducing its maximum speed (from 19000 to 17000 rpm), power but improving the torque characteristic. The first versions (until 1993) of the Kawasaki Balius 250 produced up to 45 hp. power, but with the release of new Japanese legislation, all 250 cc motorcycles. were "strangled" to 40 hp. In addition, since 2000, the model has received a modified exhaust (maximum speed - 17,000 rpm), and since 2001 - a new engine configuration (bore and piston stroke have been changed). All of these changes resulted in a smoother motor response.

Other features of the Kawasaki Balius 250 include a steel frame, simple suspensions, disc brakes, a 15 liter fuel tank (14 liters since 2003), a 6-speed gearbox and 163 kg of curb weight.

The main generations of the Kawasaki Balius 250:

Both generations did not differ much from each other, with minor changes in bodywork, suspension and electrics. Throughout the entire production period, the Balius 250 model underwent changes and modifications, which are described in more detail in the "Brief History of the Model" section.

The model was produced until August 2007, and with the release of the updated emission standards for engines, it was discontinued. 2002 to 2005 the motorcycle was also sold by Suzuki under the name - Suzuki GSX250FX.

The main competitors of the Kawasaki Balius 250 in the class: