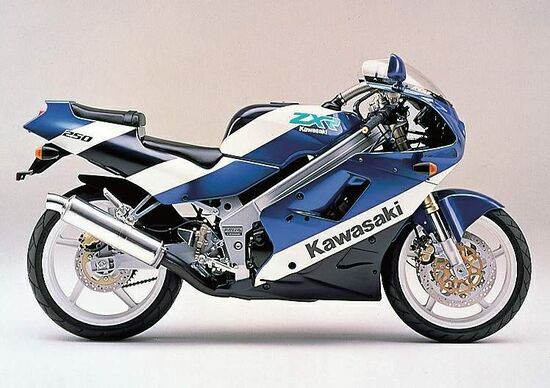 Kawasaki ZXR 250 appeared in 1989 in parallel with the older version Kawasaki ZXR 400. Both models had common visual features and were similar in technical terms. The Kawasaki ZXR250 was aimed at the Japanese market and was practically not supplied anywhere officially (in a limited edition it was available in the market of some European countries, in particular the UK).

The main modifications of the Kawasaki ZXR 250:

In 1991, the model undergoes a restyling, receiving a new design of plastic, headlights and rims. In addition, the motorcycle gets a new engine (reduces its travel for easier revs) and a smaller fuel tank.

Since 1993, new amendments to Japanese law have come into force, according to which motorcycles with an engine capacity of 250 cc are limited to a maximum power of 40 hp. The Kawasaki ZXR250 is being aligned with these regulations.

In the period from 1996 to 1998. the model is not produced for the Japanese market, resuming production only in 1999, which was the last year of the Kawasaki ZXR250 model.

Key features of the Kawasaki ZXR 250 include an in-line 4-cylinder liquid-cooled engine, an inertial boost system, a cast aluminum frame, sports adjustable suspensions, a 15-liter fuel tank and 141 kg dry matter. The engine from the ZXR250 was subsequently also installed on the Balius model.

The lineup of the Kawasaki ZXR series:

The main competitors of the Kawasaki ZXR250: