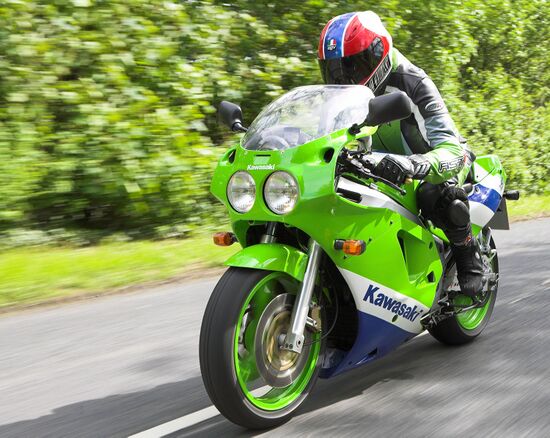 The Kawasaki ZXR750 sports bike model appeared in 1989 as one of the main competitors Suzuki GSX-R750. The concept of a Japanese sports motorcycle with a 750 cc engine was quite interesting: the companies were trying to create a medium model, between 600 cc and 1000 cc, with the advantages of one (light weight, handling) and the other (power). The Kawasaki ZXR750 is a prime example of this effort.

Model Kawasaki ZXR 750 was focused not only on the Japanese market, but was also actively sold in Europe and North America. Moreover, it should be canceled that foreign markets were the main sales priority. Japanese versions were produced with an engine with limited power up to 77 hp. (export full-strength versions produced up to 128 hp, a power increase package up to 145 hp was also available on the model of the last years of production), which sharply reduced demand. In the North American market, the ZXR750 was sold under the name “Kawasaki ZX-7 (ZX-7R)”.

Of the features of the Kawasaki ZXR 750, an aluminum frame, an inertial boost system (since 1993), sports adjustable suspensions, powerful 4-piston brakes, a 6-speed gearbox, an 18-liter fuel tank and 195 kg of dry weight should be distinguished.

The main modifications of the Kawasaki ZXR 750:

1995 was the last year of production of the model, after which it rolled off the assembly line and was replaced by Kawasaki ZX-7R / ZX-7RR. Currently, the ZXR750 model is quite rare both in Russia and at Japanese auctions, using limited demand.

The lineup of the Kawasaki ZXR series:

The main competitors of the Kawasaki ZXR 750 in the class: