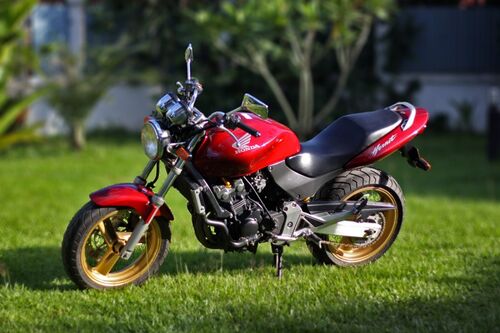 The model is also known as the Honda Hornet 250.

The motorcycle was based on the engine from the sports model Honda CBR250RR, which is an in-line 4-cylinder liquid-cooled unit producing 40 hp. power and almost 24 Nm of torque. Despite some changes and tweaks to increase torque in the low and medium speed range, the motor is high-revving, showing maximum performance at 11000-13000 rpm. The timing is also noteworthy, the drive of which is carried out by means of gears. This solution was not new for Honda and was actively used on many models of the VFR, VF series and the CB-1 model.

In general, the Honda CB250F Hornet model has standard equipment and characteristics for Japanese motorcycles of this configuration and class: a steel frame, suspension in the form of a conventional telescopic fork and mono-shock absorber, a 4-piston front brake and a 6-speed gearbox.

The Honda CB250F Hornet was available on the market until December 2007, after which production was halted without further development. The reason for this was the next update of environmental emission standards, which the motorcycle ceased to comply with. According to the company's calculations, the costs of developing the model and bringing it in line with the new requirements turned out to be too high and overlapped all profitability.

Older models of the Hornet series:

The main competitors of the Honda Hornet 250 in the class: