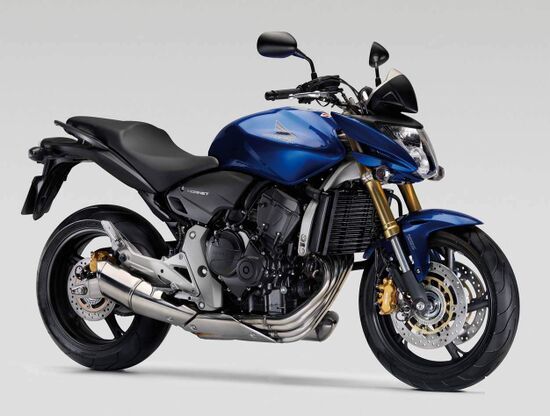 The naked model Honda CB 600 Hornet was first introduced in 1998 and since then has won a huge army of fans around the world. The model was based on the engine from the sports version of the Honda CBR600F3, which was slightly deformed (by changing the profile of the camshafts, reducing the diameter of the carburetor diffusers and changing the ignition system) and reconfigured to increase traction at low and medium speeds, as a result, the engine began to produce 94, 69 h.p. power and 62.76 Nm of torque, while remaining quite speedy (the maximum performance of the motor was reached at 9500-12000 rpm). Over time, the engine underwent improvements and changes that affected both the engine itself and the intake system, thanks to which the power of the modern Honda Hornet 600 increased to 102 hp. (The key point was the use of the engine from the sports version Honda CBR600RR).

This model may have the following names:

In more detail, the differences between each generation of the motorcycle are described in the subsection Brief History of the Model.

The main competitors of the Honda CB600 Hornet in the class:

2012 was the last year the Honda CB 600 F Hornet was produced. Since 2014, the Honda CB650F model has been introduced as the official successor.

Fuel consumption of the Honda CB 600 Hornet is declared by the manufacturer as 5.75 liters per 100 km. The actual value of gas mileage depends on the driving style of the driver and the technical condition of the motorcycle.