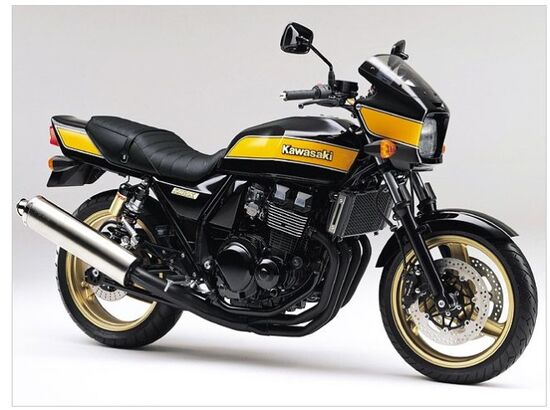 The Kawasaki ZRX 400 road bike was introduced in February 1994 as a successor to the Kawasaki Xanthus 400 and in addition to the Zephyr 400, which became a Japanese bestseller. The ZRX400, like most other models with a 400 cc engine, was only sold in the Japanese market.

In 1998, the model receives a number of important changes. The front 2-piston calipers have been replaced with 6-piston calipers, conventional tires with radials, and the classic muffler with sporty ones.

In general, the ZRX 400 model is distinguished by a classic road layout with a steel tubular frame, a conventional fork and double shock absorbers at the rear, but with sports components typical of Japanese classic motorcycles - an inline 4-cylinder high-speed engine, powerful brakes, and branded suspensions.

The Kawasaki ZRX 400 gained immense popularity in Japan and was produced up to and including 2008. Currently, the wide model is present at Japanese auctions, where you can pick up a model of almost any year and configuration.

The main competitors of the Kawasaki ZRX 400 in the class: