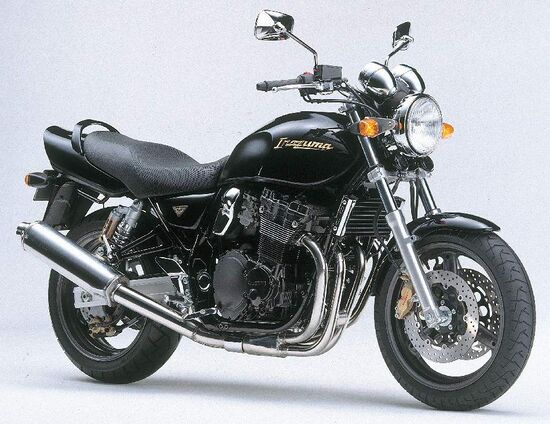 The classic road bike Suzuki GSX 400 Inazuma hit the market in 1997 and was only available for the Japanese domestic market. Since 1998, the older models of the Inazuma line have appeared on the market - Suzuki GSX750 Inazuma and Suzuki GSX1200 Inazuma.

Despite the fact that the Inazuma 400 officially appeared before these models, it was built on their basis - in particular, the reduced displacement engine with a box was taken from Inazuma 750, and the frame and chassis from Inazuma 1200.

The Suzuki GSX400 Inazuma engine is a 399 cc in-line 4-cylinder air / oil-cooled unit producing standard 53 hp. power and 36 Nm of torque. The motor is high-speed, with maximum performance at 9500-11000 rpm. This motor was built on the basis of the Inazuma 750 engine, which, in turn, passed from the sports model Suzuki GSX-R750.

Of the features of the Suzuki Inazuma 400, a rather rich equipment should be distinguished - a KYB rear suspension and Brembo 4-piston front brakes. All this has passed unchanged from the older version Suzuki GSX1200 Inazuma.

2001 was the last year of production of the model, after which it finally left the market. It so happened that the model existed for only 2 years - in 1997 and 2001. The 2001 models have been updated to meet the new environmental requirements with catalytic converters and carburettors with throttle position sensors.

The main competitors of the Suzuki Inazuma 400 in the class:

Other models in the Suzuki GSX400 series: