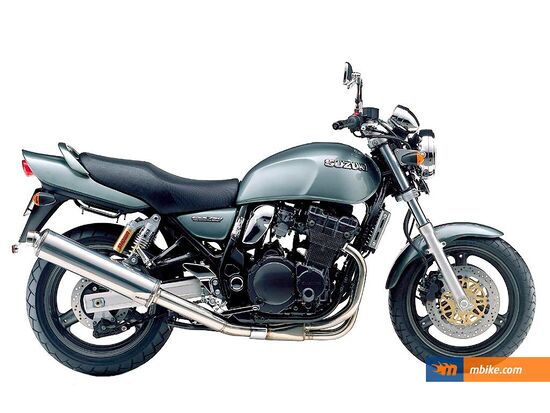 The classic motorcycle model "Suzuki GSX 750 Inazuma" was first introduced in 1998 and was produced until 2001 (official sales - until 2003). The motorcycle was focused mainly on European countries and is practically not found in Japan. Instead, there was an internal Japanese version Suzuki GSX 400 Inazuma.

The Inazuma 750 was driven by Suzuki's desire to introduce a replacement for the GSF750 and compete with the then popular classics, chief among which was the Kawasaki Zephyr 750. By the way, the name Inazuma (in the lane means "lightning") was not used on all motorcycles of this model - for example, in Germany, due to the trademark law, the word Inazuma was forbidden to use, so the model did not have this prefix there. However, in the Japanese market, the model was also called - "" Inazuma 750 "". By the way, in the Japanese market, the new motorcycle was practically not in demand, so the main sales were carried out in foreign markets.

Model Suzuki GSX 750 Inazuma received a common base with the model Suzuki GSX 1200 Inazuma and an upgraded air-oil cooling engine from the sports version Suzuki GSX-R750 late 80s - early 90s x years. The main changes in the engine affected the cylinder head (TSCC technology - Twin Swirl Combustion Chamber), the crankshaft and a number of other engine components to suppress "tops" and increase torque in the zone of low and medium revs. As a result, the engine began to produce 86 hp. power and 66 Nm of torque. The maximum performance is at 8500-9500 rpm. It is worth noting that these power indicators significantly exceeded those of other similar "classics" of those years.

Other features of the Suzuki GSX 750 Inazuma include a classic steel tubular frame, an aluminum swingarm, a 6-speed gearbox, a classic suspension configuration in the form of a simple telescopic fork at the front and two shock absorbers at the rear, disc 2-piston brakes, a 170 mm wide rear tire (from [ [Suzuki_GSX1200_Inazuma | Inazuma 1200]]), 18 L fuel tank and 201 kg dry matter.

The Suzuki GSX 750 Inazuma model existed on the market until 2001 (sales of the remnants of new motorcycles continued until 2003), after which it disappeared from the market and did not appear again. Since the model existed for a short time and was mostly export, it practically does not occur on the Japanese market. In Russia, this motorcycle is also quite rare, so it is difficult to find it. However, this fact can hardly be called a problem, since the choice of "classics" similar in layout is very large (if we consider not only direct competitors).

The "older" brother of the model is Suzuki GSX 1200 Inazuma.

The "younger" brother of the model is Suzuki GSX 400 Inazuma.

The main competitors of the Suzuki GSX 750 Inazuma in the class: