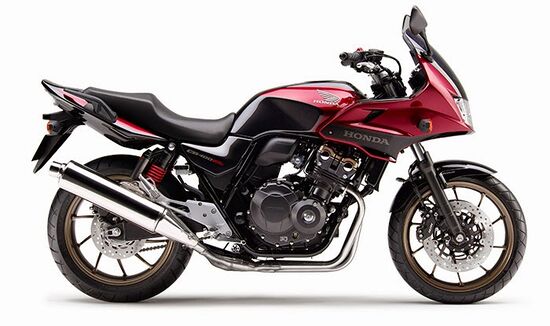 The legendary classic motorcycle "Honda CB 400 Super Four" began its history in 1992, replacing the model Honda CB-1, which was not widely used in those years. The new Honda CB 400 had more familiar classic features - a steel duplex frame, a traditional single steering wheel (instead of a clip-on), a double shock at the rear (instead of a monoshock), a classic tank and seat shape, and dual disc brakes at the front.

However, the main feature of the Honda CB 400 was the engine, which, despite the small volume of 399 cc. see, proved to be the most reliable among all similar motorcycles from other Japanese manufacturers. The engine was liquid cooled, 16 valves and 2 camshafts, and produced the traditional 53 hp. power and 38 Nm of torque. Like all Japanese inline-fours, the Honda CB400SF engine was high-revving, with maximum performance in the 9500-11000 rpm range.

The Honda CB 400 model is a domestic Japanese motorcycle and is officially supplied only to the Australian market (since 2008). However, this fact does not prevent CB400 from being sold all over the world, thanks to the efforts of importing firms.

Also noteworthy is the fact that the Honda CB 400 continues to be produced and officially marketed today as the main training bike in most Japanese motorcycle schools. The reputation of a simple, reliable, unpretentious and perfectly controlled motorcycle made this model the most preferred option for the first motorcycle not only in the Russian Federation, but also around the world.

The main competitors of the Honda CB400 in the class:

Fuel consumption on the Honda CB 400, as well as on other models, is highly dependent on the riding style and technical condition of the motorcycle. On average, petrol consumption ranges from 4-5 liters at a moderate driving speed to 8 liters with a particularly dynamic driving. The official consumption value (at 60 km / h) is 2.88-3.22 liters per 100 km.