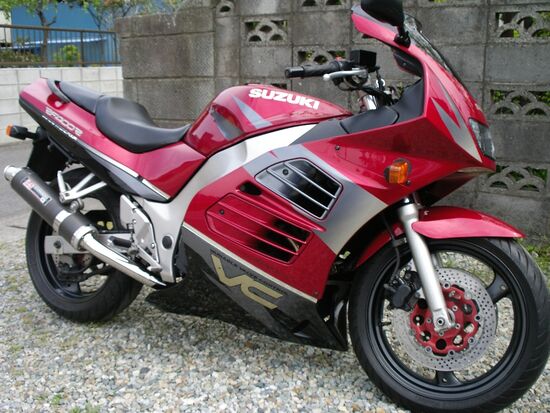 Suzuki RF 400 was first introduced in 1993 and was produced until 2000. The motorcycle was based on the older model Suzuki RF 600, which received the engine from Suzuki GSX-R 400. Subsequently, the Suzuki RF 400 was equipped with a motor from the "redhead" Suzuki GSF 400 Bandit - these versions differed in the designation VC on plastic, red cylinder head and red brake discs.

The Suzuki RF 400 was based on the success of the then Kawasaki ZZ-R 400 - a full-size sports tourist with a good appearance was in great demand. Meanwhile, only Suzuki RF400 managed to compete with it and at some point even beat it in sales. In general, the series of 400cc Japanese motorcycles of the "sport-tour" class became an excellent alternative to "sports" and "road builders" of the same cubic capacity - not differing in size from older versions, it had a modern (at that time) sporty appearance and comfort classic road bike.

The main feature of the Suzuki RF400 is the liquid-cooled in-line 4-cylinder engine producing 53 hp. power and 38 Nm of torque. The maximum performance of the motor is reached at 9500-11000 rpm. Since 1994, there have been versions with a variable timing system (VC), which allowed the maximum engine speed to be increased from 15,000 rpm to 16,000 rpm.

Other features of the model include a diagonal steel frame, simple suspensions in the form of a conventional telescopic fork and mono-shock absorber, a 6-speed gearbox, a 17-liter fuel tank and 186 kg of dry weight.

The main competitors of Suzuki RF400 in the class: