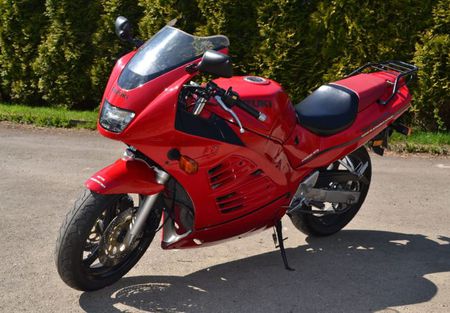 Suzuki RF 600 was first introduced in 1992 and was produced until 1998. Unlike the younger version RF400, the Suzuki RF600 was focused on foreign markets and was practically not found in Japan. The full model designation is Suzuki RF600R.

The model was based on the engine from the sports Suzuki GSX-R1100 which reduced the volume of the combustion chamber, the size of valves and carburetors. The result is a 599 cc engine producing 100 hp. power and more than 64 Nm of torque. The maximum performance of the motor is reached at 9500-11500 rpm.

Since the Suzuki RF 600 model was actively sold in Europe, in different countries it could have different technical characteristics, mainly related to engine power and exhaust system. For example, the German version produced 98 hp. (63 Nm), and the version for Switzerland - 79 hp.

The Suzuki RF 600 features a steel diagonal frame, a 6-speed gearbox, simple suspension in the form of a conventional fork and monoshock, 4-piston brakes, a 17-liter fuel tank and 195 kg of dry weight.

On the basis of the frame and chassis from the Suzuki RF 600, an internal Japanese version was built - Suzuki RF 400.

The main competitors of Suzuki RF600 in the class: