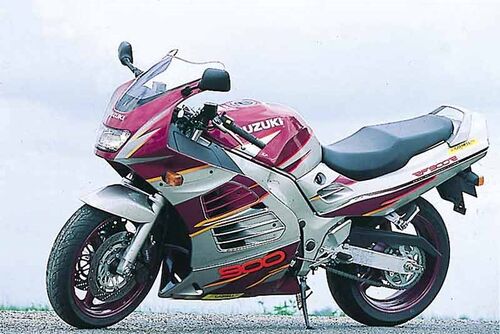 Suzuki RF 900 appeared in 1994 and was intended for export outside Japan - to Europe, North America and Australia. The full model name is Suzuki RF900R.

The motorcycle was based on an in-line 4-cylinder liquid-cooled engine with a volume of 937 cm³, producing up to 125 hp. power and up to 95 Nm of torque. This motor did not become an independent development, but was built on the basis of the motor from Suzuki GSX-R1100. It is also worth noting that the RF900 has more interchangeable parts with Suzuki GSX-R1100 than the RF600 and Suzuki GSX-R1100, although both bikes are based on the same the same engine.

In 1995, the Suzuki RF900R undergoes minor technical changes regarding clutch (instead of steel - aluminum) and front suspension (the fork receives adjustable rebound).

In 1996, the design of the rear caliper was slightly changed, although the configuration (2 brake pistons) remained the same.

1998 was the last year of production of the model, after which it finally left the market and did not receive further development. Meanwhile, despite the short production period, the Suzuki RF 900 gained a certain popularity in the world and even set several world records, having covered a certain distance in a specific time:

The main competitors of Suzuki RF 900 in the class: