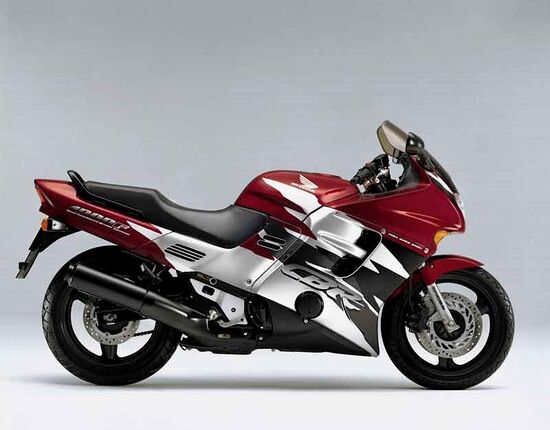 The Honda CBR1000F sports tourist model was first presented at the 1986 Cologne exhibition. The motorcycle was focused exclusively on export, therefore in Japan this model was available only in certain years (from 1993 to 1995 inclusive). The model was based on the sports version of the Honda CBR750 Hurricane with a new 998cc engine. see and timing chain drive (instead of gears). Honda CBR1000F was produced until 1999, despite the fact that in 1996 there was an official successor Honda CBR1100XX Blackbird. Since 1996, production of the Honda CBR1000F has declined and the model was only available in Europe and Australia. In 1998, production was suspended, and in 1999 they resumed again, releasing a small number of motorcycles. This year was the last for the Honda CBR 1000 F.

The model was based on a steel space frame and an in-line 4-cylinder liquid-cooled engine, producing 132-135 hp. (depending on the year of manufacture) power and 104 Nm of torque. The Japanese versions were "strangled" to 93 hp. (This engine model was also used on the classic motorcycle Honda CB1000 (CB1000SF)).

An important feature of the Honda CBR1000F is the combined braking system, which has appeared on the motorcycle since 1993. Such models can be distinguished by the 3-piston front and the same rear caliper. The principle of operation of combined brakes is that when one brake is used, the second is automatically braked, dumping part of the brake fluid pressure on the additional third piston of the brake caliper.

Major generations of the Honda CBR1000F:

The main competitors of the Honda CBR1000F in the class:

The official fuel consumption of the Honda CBR1000F is 6.4 liters per 100 kilometers. The real value, according to the owners, is from 7 to 12 liters per 100 km, depending on the driving style.