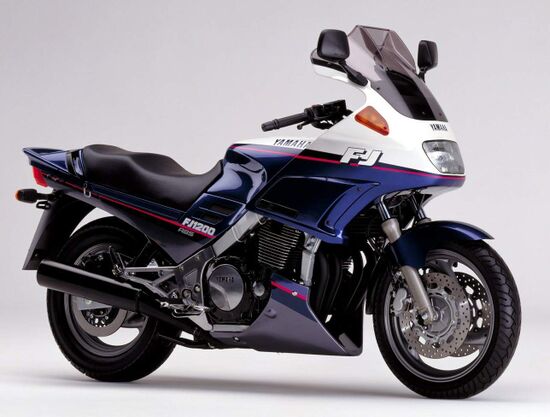 The motorcycle was focused mainly on foreign markets (Europe and the USA), but in 1991 it was officially sold in Japan as well. Also noteworthy was the fact that the Yamaha FJ1200 model produced at that time a record power of 130 hp. (among Japanese air-cooled engines) and became the first Japanese motorcycle with ABS as an option. The model was based on an in-line 4-cylinder air-cooled engine taken from the FJ1100 and increased its volume to 1188 cc. cm. As a result, the maximum power rose to 130 hp, and the torque - up to 108 Nm. The Japanese versions were throttled to 97 hp. European versions produced from 96 to 130 hp.

Among the features of the Yamaha FJ1200, a steel frame, adjustable suspensions, a hydraulic clutch, a 5-speed gearbox, versions with ABS (since 1990 - FJ1200A), a 22-liter fuel tank and 258 kg of curb weight should be distinguished.

The main competitors of the Yamaha FJ 1200 in the class: