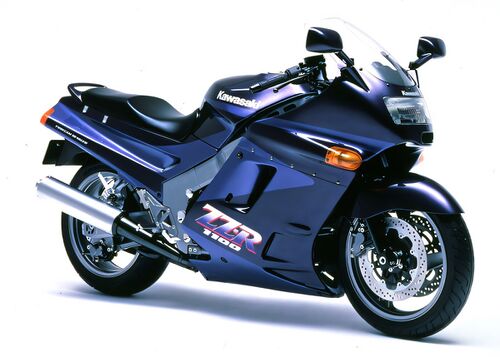 After entering the market, the Kawasaki ZZR 1100 immediately became the fastest mass-produced motorcycle in the world, reaching a top speed of about 290 km / h, and only in 1997 with the arrival of the model Honda CBR1100XX Blackbird lost this leadership.

The Kawasaki ZZ-R 1100 was based on an in-line 4-cylinder liquid-cooled engine with a volume of 1052 cm³, delivering 147 hp in the full version. power and 110 Nm of torque. The maximum engine performance varied depending on the country where the motorcycle was sold, with the exception of North American models - only full-strength versions were supplied there. The engine from ZZR1100 in derated form was also installed on the road - Kawasaki ZRX1100.

2001 was the last year of production of the model, after which it left the market, giving way to an updated version - Kawasaki ZZR 1200.

The main competitors of the Kawasaki ZZR 1100 in the class: