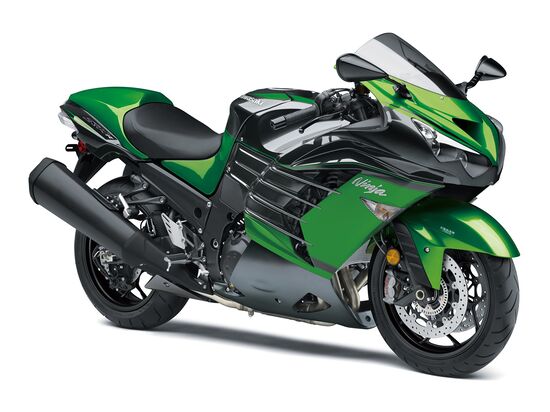 Kawasaki ZZR1400 (ZX-14R) belonged to a new, for that time, class of hypersport motorcycles - models with a plastic body kit, with the most voluminous and powerful engine, suspension system and characteristics for fast movement in a straight line.

The Kawasaki ZZ-R 1400 was based on a specially developed 1352 cc engine, which produced up to 190 hp in the first modifications. Subsequently, the maximum power was increased to 200 hp, and with the inertial boost system (Ram-Air) working, this figure increased to 210 hp.

In 2008, the first model update took place, which received an increase in power to 193 hp. Despite the fact that there were no more changes and in fact it was the last generation of the motorcycle, the factory code has changed - ZX1400C and ZX1400D (ABS).

2012 was marked by a major restyling of the Kawasaki ZZR1400 (ZX-14R) model. The motorcycle receives a new engine with an increased volume (1441 cm³), which, in addition, received polished cylinder head channels, camshafts with a higher lift, new lightweight pistons, reinforced connecting rods, crankshaft, tensioner, timing chain, gearbox elements. The model also gets a new exhaust system, Kawasaki Traction Control (KTRC) 3-level traction control and new ignition (all taken from Kawasaki ZX-10R), a slip clutch and a second radiator fan. The internal components of the rear suspension are being changed. The factory designation of the model is ' ZX1400E ' and ' ZX1400F ' (ABS).

In 2014, in addition to the basic version, a more expensive modification "Performance Sport" is offered, which is equipped with an Ohlins TTX39 rear shock absorber, gel inserts in the seat, a curved windshield, a "gold" fork and a branded Akrapovic exhaust system.

In 2016, the model received minor visual changes and, although they were barely noticeable, the factory code of the model changed - ' ZX1400H ' and ' ZX1400J . The Performance Sport version is equipped with Brembo M50 monobloc radial calipers. In the same year, a new modification `` SE appears, which costs $ 1,500 more than the base version and differs from it in the style of the dashboard, reinforced brake and clutch hoses, brake and clutch expansion tanks in black, brake system from the Performance Sport version (Brembo M50).