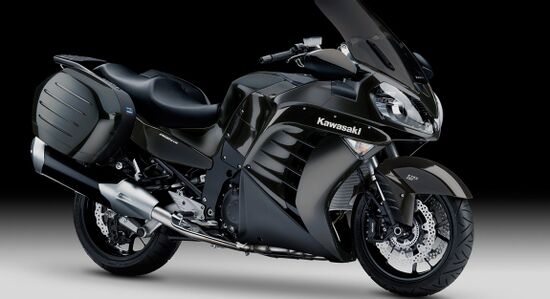 The model of the sports-touring motorcycle Kawasaki 1400 GTR ' began its production from the end of 2007 (before it was produced the model Kawasaki GTR 1000) - model year 2008. The hyperbike platform Kawasaki ZX-14 (ZZR1400) combine with the cutting edge technology found in today's flagship sports tourer. In the US market, this model was called the Kawasaki Concours 14 .

The Kawasaki 1400 GTR features a liquid-cooled, in-line 4-cylinder engine producing 160 hp. (with inertial supercharging) and 136 Nm of torque. The motor is tuned for traction in low and medium ranges of operation, has a variable timing system (from Mitsubishi Motors). The maximum engine performance is reached at 6000-9000 rpm.

Another important feature of the bike is the Tetra-Lever multi-link rear suspension, much like BMW (Paralever) and Moto Guzzi (CARC). When braking and driving over bumps, the rear of the motorcycle does not rise, but remains under load all the time, which has a positive effect on handling.

Among other things, the model is equipped with the KIPASS system (Intelligent Proximity Activation Start System), which means access to start the motorcycle without a key. The essence of the system lies in the fact that the ignition key is always inserted into the lock, but it can be turned only if the owner of the motorcycle is standing nearby.

Main configurations of the Kawasaki 1400 GTR :

The main competitors of the Kawasaki 1400 GTR in the class: