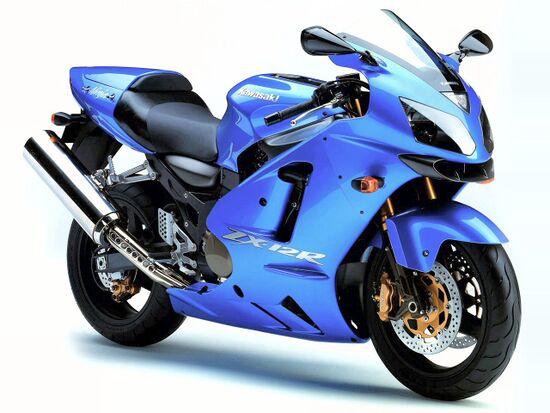 The sports bike model Kawasaki ZX-12R appeared in 2000 as a successor to the model Kawasaki ZZ-R1100 and as Suzuki's answer to its model Hayabusa, which at the time of its release became the fastest production motorcycle in the world. The ZX-12R was designed to reclaim Kawasaki's primacy.

The Kawasaki ZX-12R was based on a specially developed engine, which is an in-line 4-cylinder liquid-cooled unit with a volume of 1199 cc, producing up to 181 hp. power and up to 137 Nm of torque. The motorcycle was also equipped with an inertial boost system, which, at its maximum performance, increased power to 190 hp.

In 2002, the model underwent a slight restyling, having received updates on the engine and chassis.

In 2004, the model receives a new control unit, immobilizer and new radial 4-piston calipers (instead of 6-piston).

The Kawasaki ZX-12R features an aluminum frame, fully adjustable sports suspensions in the form of an inverted fork at the front and a monoshock at the rear, an inertial boost system, powerful disc brakes, a fuel injection system, a 6-speed gearbox, a 20 l fuel tank (19 l - since 2002) and from 243 kg of curb weight.

The advent of such powerful sports bikes as the Kawasaki ZX-12R and Suzuki GSX1300R Hayabusa ushered in a new class of motorcycles - hypersport. And although the ZX-12R was faster than the Hayabusa in terms of performance, most consumers still preferred the model from Suzuki, which ultimately forced Kawasaki to develop a new flagship - Kawasaki ZX-14R (ZZ-R1400) ...

The main competitors of the Kawasaki ZX-12R in the class: