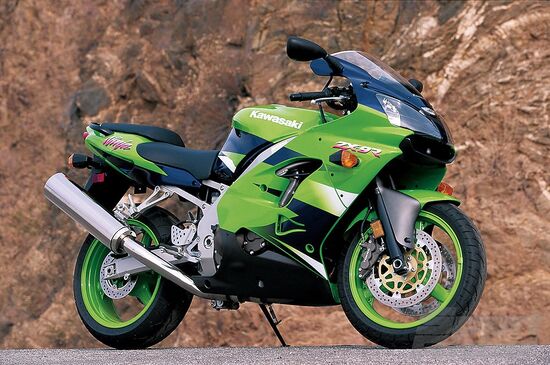 The Kawasaki ZX-9R sports bike model appeared in 1994 as Kawasaki's response to the Honda CBR900RR Fireblade model, which almost immediately gained popularity in the market. With the CBR900RR Fireblade, Honda has been able to combine the power of a liter bike with the handling of lighter 750cc models. Kawasaki, on the other hand, offered more power and more impressive dynamic characteristics, but noticeably lost in weight and handling. In general, the ZX9R was more suited to the role of a sports tourist with its more upright fit and high clip-on position.

The first versions of the Kawasaki Ninja ZX-9R were built on the basis of another sports model Kawasaki ZXR750, getting from it virtually the same engine, but increased displacement and front inverted forks. Subsequent generations were significantly revised and finally separated from Kawasaki ZXR750 - they received a new engine, frame and suspension.

The Kawasaki ZX-9R was based on an in-line 4-cylinder liquid-cooled engine with a volume of 899 cm³, producing from 139 hp. on the first generations up to 144 hp. power on the latter. Engine performance could vary significantly depending on the countries of sale.

The first modifications of the Kawasaki ZX-9R had the factory designation ZX900B and featured a double headlight, an inverted fork, a 20-liter fuel tank, an aluminum tubular frame and 139 hp.

In 1998, the model receives a restyling and a new factory designation ZX900C. This generation features a new frame, engine, suspensions (conventional 46 mm telescopic forks), 6-piston front calipers (appeared in the middle of the first generation) and smaller brake discs (296 mm instead of 320 mm). Maximum power - 143 hp

In 2000, the model undergoes another update, changing the appearance (double headlight), rear suspension settings, increasing the dimension of the rear tire, getting new carburetors and increasing the maximum power to 144 hp.

2002 marked the last restyling of the model, which resulted in the ZX9R receiving 4-piston front calipers and 320mm discs, bringing back the previous 1st and 2nd generation carburetors and slightly increasing the curb weight.

2003 was the last year of production of the model, after which it finally left the market, giving way to a completely new flagship model - Kawasaki ZX-10R.

The main competitors of the Kawasaki ZX-9R in the class: