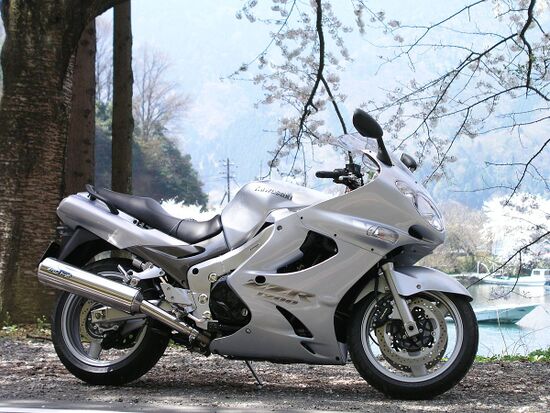 The sports tourist model Kawasaki ZZR 1200 appeared on the market in 2002 as a successor of the Kawasaki ZZ-R1100, which from 1990 to 1996. was recognized as the fastest mass-produced motorcycle in the world. However, with the advent of Suzuki GSX1300R Hayabusa, he lost this leadership, and Kawasaki continued the "arms race", offering the market a new model - ZX-12R. At the same time, the ZZ-R1200 model did not pretend to be a leading position, but was offered as a flagship sports tourist.

Compared to Kawasaki ZZ-R1100, the new model has received a number of technical differences:

The Kawasaki ZZR 1200 was based on an in-line 4-cylinder liquid-cooled engine with a volume of 1164 cc, producing up to 155 hp. power and up to 125 Nm of torque. European modifications, depending on the countries, had different power, most often less. Full strength versions have been supplied to markets in North America, Australia and Malaysia. This engine was subsequently also installed on Kawasaki ZRX 1200.

Other features of the motorcycle include an aluminum frame, adjustable suspensions, a hydraulic clutch, a 6-speed gearbox, powerful 4-piston front brakes, a 23 liter fuel tank and 271 kg of curb weight.

2005 was the last year of production of the Kawasaki ZZR1200, after which it left the market, subsequently giving way to the flagship - Kawasaki ZZR1400.

The main competitors of the Kawasaki ZZR 1200 in the class: