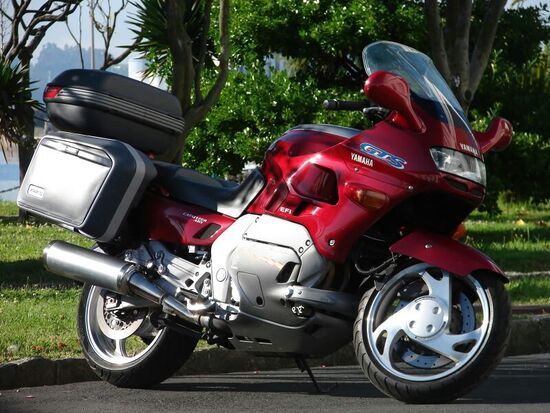 The Yamaha GTS 1000 sports-touring motorcycle was first presented in 1992 at the IFMA in Cologne, and went into series since 1993.

The model was based on the engine from the sports version Yamaha FZR 1000, which was seriously derated, reconfigured and added an injector instead of carburetors, achieving not only confident traction at low revs, but also linear characteristics throughout the entire operating range. As a result, the engine, which originally produced 145 hp, began to produce up to 100 hp. (depending on the country of sale) power and 106 Nm of torque, fully available already at 6500 rpm.

However, the main feature of the Yamaha GTS 1000 was the unique front suspension, which is a console wheel mounting system with special rods and pivots responsible for steering and damping. This suspension system is called RADD and was developed by James Parker. Among the advantages, it should be noted the record rigidity, stability and lack of dive when braking. This is especially noticeable on uneven roads. However, the shortcomings crossed out all the advantages of this design - an increase in the unsprung mass (compared to the classic fork, the difference was significant - 31.6 kg versus 21.5 kg), the ambiguous nature of left and right turns, a higher cost of the structure and almost no maintainability ( in the event of an accident, not only the main suspension arm could bend, but also the frame itself). The bike's handling and 130mm wide front wheel deteriorated, however, despite extensive criticism, the bike continued to be sold virtually unchanged until 1999.

Also, a lot of questions were caused by increased fuel consumption. According to numerous tests, fuel consumption when driving on the Autobahns could reach more than 10 liters per 100 km, which was too much for a touring motorcycle. The reason for this, of course, was the Genesis sports engine, which, although it underwent tangible changes, was still not fully optimized for touring.

On top of that, the Yamaha GTS 1000 was equipped with chain drives, which was less suitable for touring purposes than the traditional cardan for motorcycles of this class.

Meanwhile, the Yamaha GTS 1000 had its advantages as well. Of these, one can single out a developed wind protection and a successful design of mirrors, an informative dashboard, adjustable suspensions, an injector and, most notably, the presence of versions with ABS.

In 2006, Bike magazine awarded the Yamaha GTS 1000 the title of one of the most interesting motorcycles among rare models.

Thus, the Yamaha GTS 1000 has received many mixed reviews from users and experts. On the one hand, this is a very interesting, original and technologically advanced motorcycle for its time. But on the other hand, he was subjected to great criticism and was not understood everywhere. For example, in the US market, the model was sold for only a year, until 1994, after which it was not officially supplied there. A total of 1,369 motorcycles were sold in Germany. Low demand forced Yamaha to abandon production of the GTS 1000 as early as 1997, but sales of remnants of new motorcycles continued in some countries until 1999. In Russia, this motorcycle is considered quite rare; there are literally a couple of copies on the used motorcycle market.

The main competitors of the Yamaha GTS 1000 in the class: