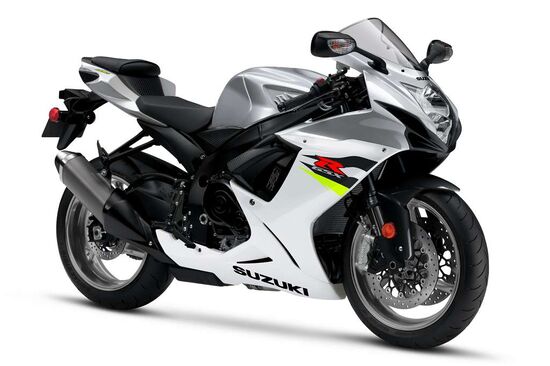 Suzuki GSX-R 600 first appeared in 1992. At that time, the model was a Suzuki GSX-R750 with a downsized engine without any changes. This model lasted until 1993, after which it disappeared from the Suzuki line of motorcycles.

The redesigned Suzuki GSX-R600 was introduced for 1997, and it is with this that it is customary to begin reporting the history of the model. Based also on the Suzuki GSX-R750, the new GSX-R 600 features a new inertia-supercharged engine (SRAD - Suzuki Ram Air Direct) and an updated look.

The first major update of the model took place in 2001. The Suzuki GSX-R600 gets a new, more modern design, electronic fuel injection instead of carburetors, a new engine configuration (shorter crankshaft stroke, increased compression ratio). The maximum power rises from 106 to 118 hp.

In 2004, the model undergoes a new restyling, receiving an updated appearance, radial calipers, an inverted fork, a new generation of frame and engine - a 32-bit control unit, titanium valves, increased compression ratio (from 12.2 to 12.5). The maximum engine power is increased to 120 hp.

For 2006, the model is redesigned with a new look, a new exhaust system, new calipers, slipping clutch and a slight optimization of the engine, which allowed to increase the maximum power to 121 hp.

For 2008, the Suzuki GSX-R600 is updated to the next generation with a new exhaust (for new noise requirements), a new subframe and a new fuel tank. The motorcycle is also equipped with the S-DMS (SUZUKI Drive Mode Selector) system, which allows you to select one of three engine settings.

2011 was marked by another restyling of the model. In addition to the looks, the Suzuki GSX-R600 gets a new Showa BPF fork, Brembo monobloc calipers, a lightweight frame and swingarm (total weight reduction - 9 kg). The maximum power rises to 125 hp.

`` The main competitors of the Suzuki GSX-R600 in the class :