From Enduro.team
(Redirected from Kawasaki ZX-6R (636))
Jump to: navigation, search 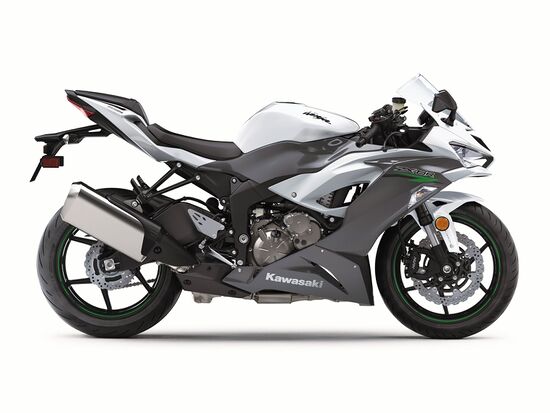 The sports motorcycle model Kawasaki ZX-6R appeared in 1995. The motorcycle was based on the developments and technologies of the older version Kawasaki ZX-9R, including the proprietary inertial boost system (Ram-Air), which gives an increase in power at high speeds. This generation received the designation ' ZX600F ' and was distinguished by a maximum power of 105 hp.

In 1998, the model undergoes a slight restyling and receives minor technical changes. In particular, the design of the filter box was changed, due to which the maximum power increased to 108 hp. The model also received 6-piston front calipers, increased rear tire width (up to 170 mm) and new Mikuni carburettors (instead of Keihin). The factory designation of the model is ZX600G.

In 2002, Kawasaki released a new version with a larger displacement engine - the Kawasaki ZX-6R 636 . Factory designation - ZX636A. This model was based on the ZX600J body with the addition of "636" decals on the fairing. For competition enthusiasts, a 599 cc version was also available and was now called the Kawasaki ZX-6RR.

In 2003, the model series received another restyling. Factory designations - ZX600K, ZX600M; ZX636B. The model gets a new look, an inverted fork, 4-piston radial front calipers and an injector. Engine speed increased by 500 rpm.

2005 - another restyling of the model. Factory designation - ZX600N, ZX636C, ZX636D. The maximum engine speed was increased by an additional 1000 rpm and the compression ratio was increased to 12.9, which increased the power of the ZX636 to 130 hp. The diameter of the front brake discs was increased to 300 mm (instead of 280 mm), and the fuel tank capacity was reduced to 17 liters.

In 2007, Kawasaki no longer offers the 636 version, leaving only the 600 cc, changing its name to the familiar Kawasaki ZX-6R. Factory designation - ZX600P. The model received significant engine changes, affecting the crankshaft, increasing the compression ratio and raising the maximum power to 125 hp. The front tire size has changed to the standard size - 120/70.

In 2009, the model changes again with an updated look, the new Showa Big Piston Fork front fork. In 2010, the model receives a new clutch with a slip function. Factory designation - ZX600R.

In 2013, Kawasaki is once again offering the ZX-6R 636 as a basic version of the motorcycle, while selling the ZX-6R at a reduced price. The model also receives a traction control system (KTRC - Kawasaki Traction Control) with 3 presets "sport", "city" and "rain", an intelligent anti-lock system (KIBS - Kawasaki Intelligent anti-lock Brake System), Power Mode with the ability a choice of 2 fuel cards, a new frame and a new generation of Showa BPF-SFF suspension. The maximum power of the 636 version is increased to 131 hp.

The main competitors of the Kawasaki ZX-6R in the class: