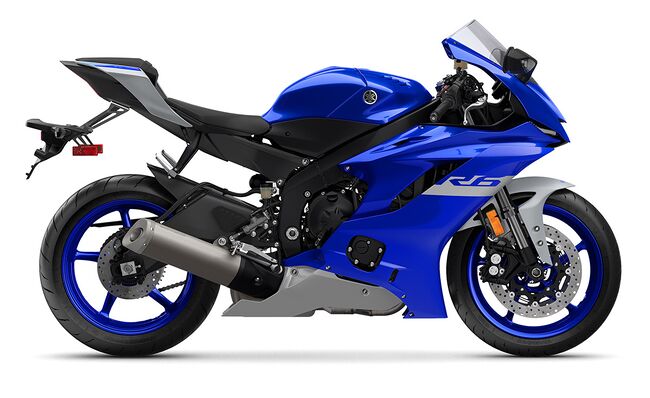 Yamaha R6 (YZF-R6) appeared on the market in 1998 (1999 model year) as the successor to Yamaha YZF600R Thundercat (which was also produced in parallel, but positioned itself as a sports tourist) and as a younger version of the model Yamaha R1 (YZF-R1).

The basis was taken a new engine with a volume of about 600 cm³, liquid cooling, producing up to 120 hp. Compared to the Thundercat, the engine is shorter, with low friction forged pistons, a new crankshaft, connecting rods, ignition system, two-pin spark plugs and Mikuni carburettors with throttle position sensor.

In 2001, the Yamaha R6 engine received minor changes that affected the connecting rods, pistons, the exhaust system, the ignition system and the battery (a slightly lighter one, with a lower capacity began to be installed).

In 2003, the model undergoes the first major restyling. The appearance of the plastic and the headlight changes, the wheels become 5-spoke. The updated model gets an injector instead of a carburetor, which has led to a noticeable increase in thrust in the low and medium speed zone, although the maximum power figures remain the same at 120 hp. The new generation of the Deltabox frame. The curb weight is reduced by 6 kg.

A year later, in 2006, the Yamaha YZF-R6 undergoes another major restyling. The appearance of the plastic, the headlight and the exhaust system is changing. The model gets a new inertial supercharged engine, delivering up to 127 hp. (122 hp - naturally aspirated). The capacity of the fuel tank is increased: 17.0 → 17.5 l. The model also gets an electronic throttle (YCC-T - Yamaha Chip Controlled Throttle) and a dual-injector injection system (Mikuni 40EIS → Mikuni 41EIDW). The gearbox ratios change, the clutch receives a slip function. The motorcycle receives a new ignition system (DC CDI → TCI). The engine gets titanium valves, lightweight forged pistons, a titanium exhaust system with EXUP valves, and a lightweight flywheel.

In 2008, the model changes again, although visually it is very similar to the previous generation. The capacity of the fuel tank is slightly reduced: 17.5 → 17.3 l. The engine increases the compression ratio: 12.8 → 13.1. The maximum power rises to 129 hp. (with inertial supercharging). The model receives a system with an automatically variable intake manifold length - YCC-I (Yamaha Chip Controlled Intake).

2010 was marked by another small restyling of the Yamaha YZF-R6 model. The model gets an updated look, a new engine management program and a new exhaust. Its curb weight is 189 kg. The maximum engine power is 123.8 hp.

For 2017, the bike is redesigned with the visual cues of the new Yamaha R1. The model is equipped with a 43 mm inverted fork, a new rear shock absorber, a new braking system (brake discs increased to 320 mm, ABS), an aluminum fuel tank, a magnesium subframe and a new aerodynamic system (reduces air resistance by 8%). There are new electronic systems: TCS (Traction Control System) and D-Mode (Selectable Drive Mode). The maximum power is 118.4 hp. The curb weight is 190 kg.

The main competitors of the Yamaha R6 in the class: